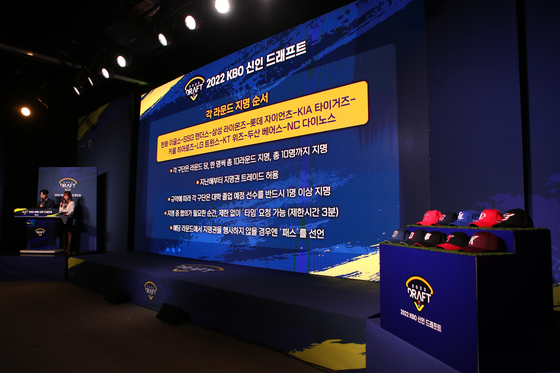 The second round of 2022 annual rookie draft was held at Blue Square in Yongsan, central Seoul on Monday. [KBO]


The KBO's overall rookie draft was held on Monday at Blue Square in Yongsan, central Seoul, with 100 new players named to the 10 KBO clubs.

The rookie draft has two rounds and takes place every year. It is the most common way for baseball clubs to recruit prospective high school and university graduate players. Both drafts are held in reverse order of the last season’s final standings.

The first draft, held last month, is localized, with clubs choosing one player from their respective region. The only exception is the bottom three clubs, who are allowed to look further afield. This year was the last time the localized draft will be held. Starting next year, both drafts will be open to all players regardless of region.

A total of 1,006 players applied for the draft.

Hanwha Eagles, who finished last in the 2020 season, chose Park Jun-young of Sekwang High School in Cheongju as the first pick of the 2022 draft.

“I want to thank the Hanwha Eagles for recruiting me,” Park said after the draft. “I also want to thank everyone who helped me on the way.

“Though I expected to be named soon, I didn’t expect to be named first. I was very happy when I heard my name. I will do my best to help the Eagles win.”

At the previous draft in August, Hanwha picked another rising star pitcher, Moon Dong-ju of Jinheung High School in Gwangju.

“We had no doubt in picking Park who is right now one of the best in Korea,” said Jung Min-chul, general manager of the Eagles. “We expect a healthy rivalry between Moon and Park and hope that will make them the best pitchers in the league."

Another interesting recruit was Kwon Kwang-min, who joins the domestic league after being released from his a minor league contract with the Chicago Cubs. The outfielder also joins the Eagles.

With 99 players named, the NC Dinos added to the suspense by asking for a timeout before naming their last player and the very last player to be recruited at the draft.

“We are satisfied with the results of the draft,” said Lim Sun-nam, the head of NC Dinos analysis team. “Congratulations to all newly named rookie players, and a big shout out to staff members that enabled today's draft and also to the players’ parents.”

NC makes some changes after difficult 2021

Eagles continue rebuild after another year at the bottom