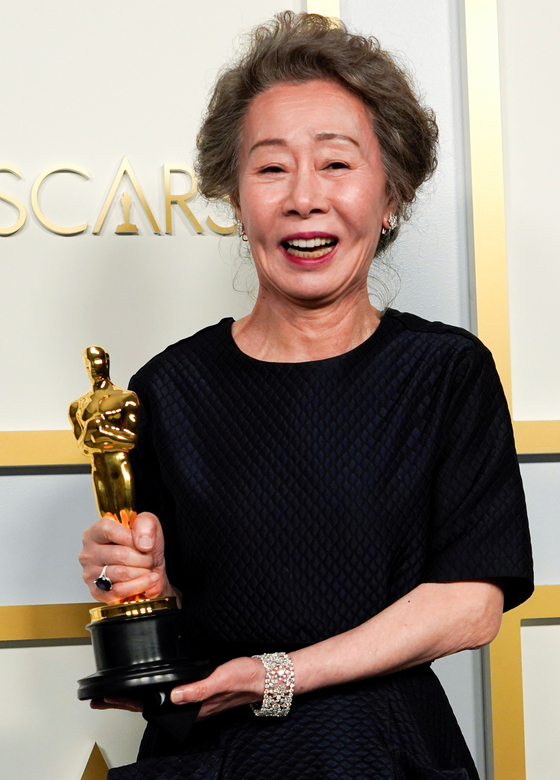 Youn Yuh-jung, winner of the award for Best Actress in a Supporting Role for ″Minari,″ poses in the press room at the Oscars in Los Angeles. [REUTERS/YONHAP]


Actor Youn Yuh-jung, who won a Best Supporting Actress Oscar this year for her role in “Minari,” was included on Time magazine’s list of the 100 most influential people of 2021.

Youn was included in the “Titans” section of the list, which was revealed by the magazine Wednesday, while Yeun was in the “Artists” category.

The 74-year-old actor won an Oscar at the 93rd Academy Awards for her role of the grandmother Soon-ja in director Lee Isaac Chung’s “Minari.” She was the first Korean actor to receive an Oscar and the second Asian actor to win the best supporting actress award after Japanese-American actor Miyoshi Umeki for “Sayonara” (1957) at the 30th Academy Awards in 1958.

Youn has won over 40 awards for her performance in “Minari,” including best supporting actress awards at the 27th Screen Actors GuiId Awards and the 74th British Academy of Film and Television Arts.

“I’ve rarely met people with her level of confidence,” Yeun was quoted by Time as saying about Youn. “It feels like a confidence born from a deep sense of self.”

“It was a year in which I’ve received generous praise even though I’ve only done what I’ve always done,” Youn said through her agency Hook Entertainment. “I’m amazed to find that I’ve made it to the 100 list.

“I hope I was someone who’s had positive influence over people, and it’s an honor to see my name alongside people much greater than me.”

Since 2004, Time magazine has been publishing lists of the 100 most influential people of the year.