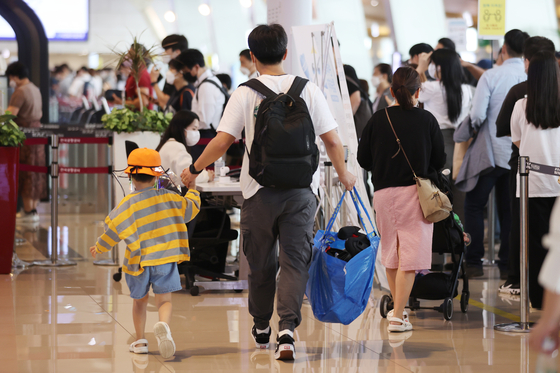 People queue up at Gimpo Airport on Friday, a day before the long-weekend and the Chuseok holidays. [YONHAP]

The average of Covid-19 infections in the greater Seoul area hit a record number this past week, the health authorities announced Friday, warning people against traveling in large numbers to their hometowns during the Chuseok holidays.

“The daily average in the greater Seoul area [Seoul, Gyeonggi and Incheon] surpassed 1,300 during the past week, which was the highest it’s been in the region since the onset of the pandemic,” said Lee Gi-il, a senior official of the Ministry of Health and Welfare in speaking to the press on Friday. “We ask everyone to please stay at home during the Chuseok holidays if you can.”

The Korea Transport Institute estimated around 32.66 million people will travel this Chuseok, which is 3.5 percent more than last year. The holidays last from Monday to Wednesday, but many will start traveling on Friday or Saturday.

Health authorities have allowed families to gather in numbers of up to eight people throughout the country from Friday to Sept. 23, as long as the group consist of at least four vaccinated people.

To minimize contacts amongst travelers by car, health authorities banned rest stops from serving food at tables from Friday. Only take-out is allowed. Some rest stops including the Ansan, Icheon, Yongin, Boseong green tea and Tongdosa temple rest stops will have Covid-19 testing centers.

Korea added 2,008 new cases Thursday, of which 35 were imported, bringing the total case load to 281,938, according to the Korea Disease Control and Prevention Agency (KDCA).

Of local cases, 78 percent were in the greater Seoul area.

As of Thursday, 69 percent of Korea’s population were given their first shots, and 41.8 percent were fully vaccinated.

Korea intends to reach herd immunity by having 70 percent of its population fully vaccinated by the end of October.