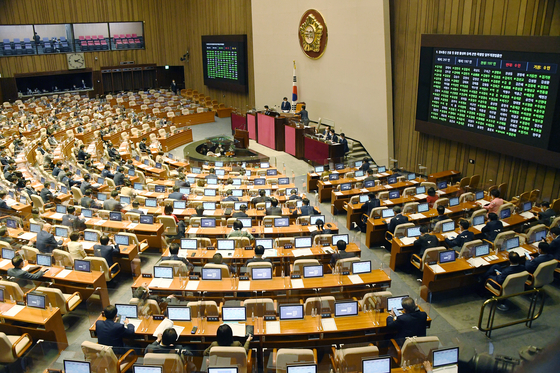 Voting at the National Assembly on Tuesday proceeds without the controversial amendment to the Press Arbitration Act. [NEWS1]


Ongoing negotiations between the ruling and opposition parties on Tuesday resulted in a delay to the parliamentary vote on the controversial amendment to the Press Arbitration Act, following another failure to break their weeks-long impasse over the bill.

The vote on the bill, which had been delayed from Monday to Tuesday in the hopes of a breakthrough, was again postponed to Wednesday to allow for more time for the parties to reach a compromise bill.

Following the meeting, Yun admitted to reporters at the National Assembly that “the parties have yet to come to a unified alternative bill to the initial proposal,” and said the DP will try to come to a bipartisan deal with the PPP by Wednesday.

In its current form, which was railroaded last month by the DP through the National Assembly’s Culture, Sports and Tourism Committee and the Judiciary and Legislation Committee, the bill would increase media outlets’ legal liability for the release of “intentionally misleading” or “grossly negligent” news reporting to up to five times the damages caused by the reporting.

However, the proposed amendment faced strong backlash from not only media organizations, the PPP and the minor conservative People’s Party (PP), but also the minor progressive Justice Party.

Faced with both domestic and international outcry, the DP backtracked on its plan to pass the bill into law at a plenary session at the end of August.

However, the parties were unable to resolve their disagreement over several key points in the bill by the Monday deadline they had set last month before a full parliamentary vote, leading them to postpone the plenary voting session to Tuesday afternoon.

According to officials from both parties, negotiators were able to narrow their differences on the most contentious issue of a fivefold increase in punitive damages on media outlets found guilty of spreading misinformation, and considered replacing it with alternative methods of imposing increased penalties for media infractions.

However, the parties remained at odds over language in the bill which would have given victims of erroneous reporting the right to demand the removal of offending media reports, according to officials from the PPP.

The parties also continued to disagree over the rights of victims to demand media outlets publish corrections.