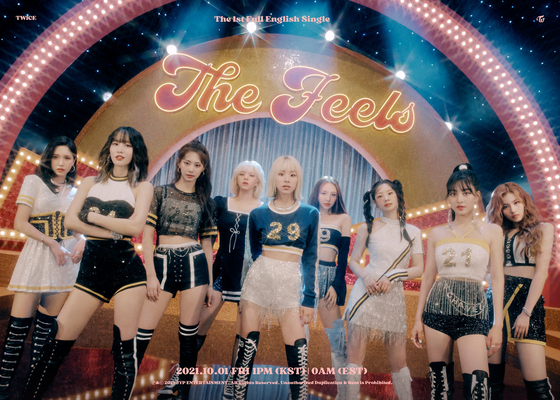 To celebrate the new release, the group will be holding a Twitter Blueroom Live session to meet with fans at 2 p.m. today, and will perform the song for the very first time on NBC’s “The Tonight Show Starring Jimmy Fallon” later that night, or at 12:30 p.m. on Saturday in Korea.

On Oct. 7, the group will also appear on ABC’s daytime news program “GMA3: What You Need To Know.”

According to JYP Entertainment, “The Feels” is a disco-pop track with a fast tempo. The lyrics are about feeling happy after falling in love at first sight.

Republic Records, a record label owned by Universal Music Group, signed with the group’s agency JYP Entertainment last year to be Twice’s American label and distributor. Since then, their Korean-language hits “More & More,” “I Can’t Stop Me” and “Cry for Me” have also been released in full English-language versions.