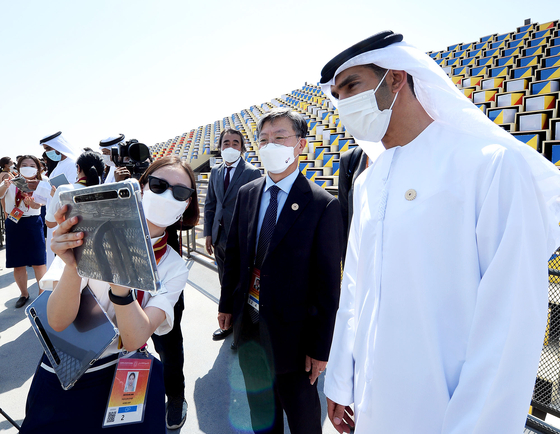 Yu Jeoung-yeol, center, commissioner general of the Korea Pavilion and president and CEO of Kotra, and Thani Al Zeyoudi, minister of State for Foreign Trade of the United Arab Emirates, experience artificial reality technology during a tour of the Korea Pavilion on Oct. 1. [KOREA TRADE-INVESTMENT PROMOTION AGENCY]


DUBAI, United Arab Emirates — Take a selfie and your virtual avatar will guide you to cutting-edge technologies, K-pop performances and even a nice restaurant to try a bowl of bibimbap.

These are just some activities people can experience at the Republic of Korea Pavilion at Expo 2020 Dubai, which opened its doors to the world on Oct. 1. Expo 2020 Dubai, the first World Expo to be held in the Middle East, aims to increase awareness about the challenges faced by humanity on a global scale, with the theme “Connecting Minds, Creating the Future." It was originally scheduled to open last year but was postponed due to the pandemic.

The expo runs for 182 days until March 31 next year, with a total of 192 countries of the 193 UN member states participating with their own pavilions (only North Korea was absent). Each country could build its pavilion choosing one of three subthemes of the expo — mobility, sustainability and opportunity.

The Korea Pavilion is located in the mobility district. It is on a 4,651-square-meter (50,063-square-foot) site, the fifth largest among all participant countries at the expo. The site opened its door to the public on Oct. 1 after holding a ceremony in the morning.

The pavilion is hosted by Ministry of Trade, Industry and Energy and organized by Korea Trade-Investment Promotion Agency (Kotra), with many big and small-sized Korean companies participating as sponsors and partners. 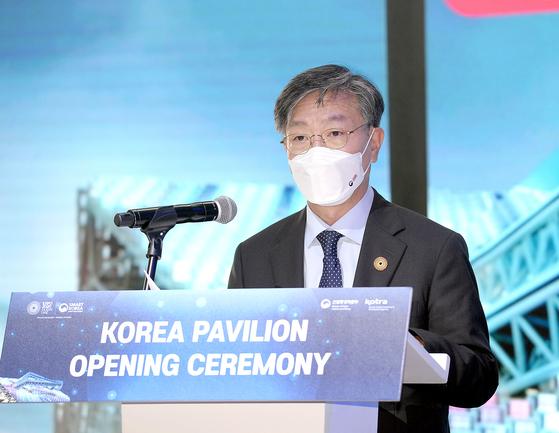 
“The Korea Pavilion was built based on the motif of a bloomed flower in the desert. With this, we want to show Korean dynamism that brings together individualistic images in harmony regardless of nationality, gender or age,” said Yu Jeoung-yeol, commissioner general of the Korea Pavilion and President and CEO of Kotra during an opening ceremony of the Korea Pavilion on Oct. 1. “After undergoing a long construction process of about 600 days together with many partner companies, today, for the first time, we open its doors to you.”

“From such a perspective, this Dubai Expo is expected to be a golden opportunity for the UAE and Korea to create a new future together,” Yu added. 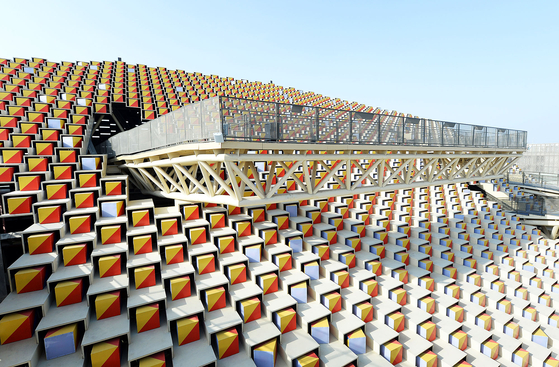 The facade of the pavilion has been built with 1,597 colorful cubes to express Korea's dynamism. [KOREA TRADE-INVESTMENT PROMOTION AGENCY] 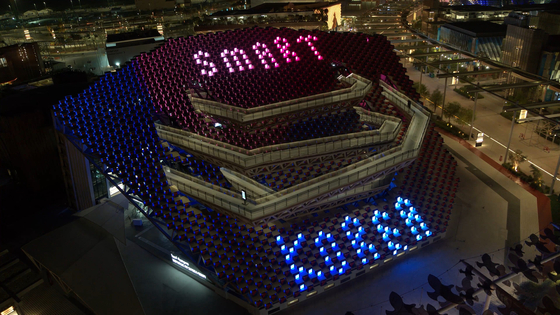 A Closer look into the Korea Pavilion


The external appearance of the Korea pavilion itself stands out not just because of its size, but also because it is covered with 1,597 cubes that spin. The faces of the cubes are colored red, blue, yellow and white and spin to form patterns and words.

Four ramps cross the pavilion, which has three floors above ground and one basement floor, and all floors are connected by the ramps.

“Our intention was to make the building itself an exhibition,” said Moon hoon, an architect of the pavilion.

“Spinning expresses Korea’s dynamism. The cubes on the facade spin and people spin across the pavilion by the ramps. In our world, everything alive spins — galaxies spin and even our DNA spins.”

The pavilion was designed by three local architects including Moon and built by Ssangyong Engineering and Construction.

All visitors to the Korea Pavilion will be given a Samsung Electronics mobile device, with which they can take a selfie and make a virtual avatar of themselves before starting the tour. The avatar will become their tour guide and tell the visitors where to go, and how to participate in a few of the activities offered in the pavilion. People can take up to five pictures with their avatars during the exhibition and send them to their e-mail address via the device. 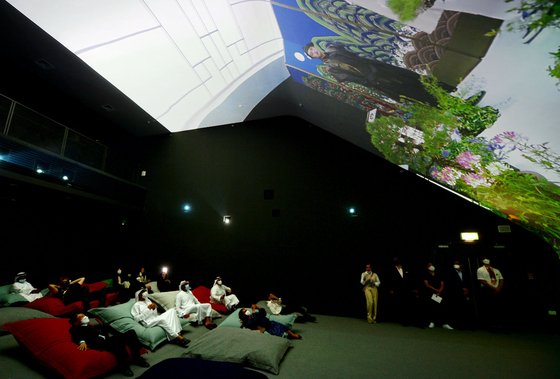 People are lying down in the Vertical Cinema zone of the Korea Pavilion, which has a mega-sized screen and allows people to watch videos. [KOREA TRADE-INVESTMENT PROMOTION AGENCY]


Following directions from the avatars, visitors will have an opportunity to look at the future of Seoul and Busan using the augmented reality (AR) technology. They can also look at a scene of flying taxi picking up customers at a station.

Visitors then will be led to a Vertical Cinema zone, which has large-sized cushions on which they can sit and take a virtual trip to Korea. With a mega-sized screen on the ceiling, people can feel like they were walking on the Korean street, flying around Seoul and watching performance of Samulnori (traditional Korean percussion).

“It was really good experience in the Vertical Cinema. It was first time for me to lay down and see the screen,” Wiam Noussy, a visitor from Morocco, told the Korea JoongAng Daily. “The AR session was also very smart. It was something enlightening."

In the courtyard, which is called Madang, visitors can find a kinetic sculpture hanging in the air. About 40 screens make occasional movement like waves, showing the images of beautiful scenes in Korea, like Jeju’s canola flowers. It aims to express how people, nature and technologies mingle and connect with one another, according to Kotra.

Another event that caught the eyes of many visitors was a performance offered in the courtyard. Five dancers appeared and performed various shows, including breakdancing, dancing to K-pop and Samulnori. There will be 10 performances per day for the six months of the exhibition. CJ ENM was in charge of planning and preparing the performances. 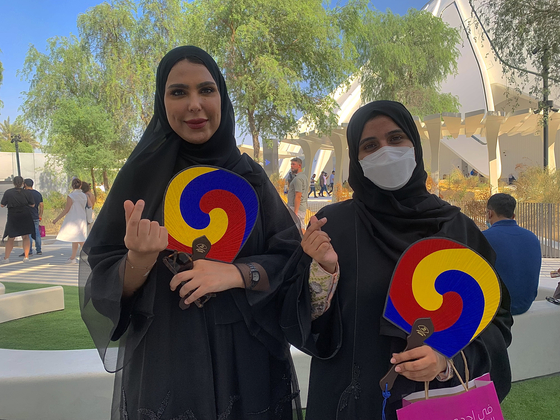 Visitors to the Korea Pavilion, Norah Awad from Saudi Arabia, left, and Wasmeya Alrashdi from Abu Dhabi, pose for a photo holding fans from the pavilion. They told the Korea JoongAng Daily that they especially liked the Korean food. [SARAH CHEA] 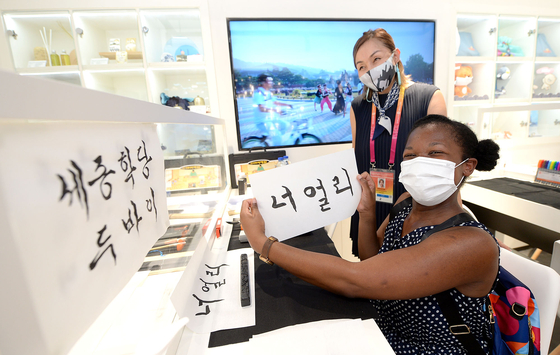 A visitor to the Korea Pavilion poses for a photo after learning about Korean calligraphy on Oct. 1. [KOREA TRADE-INVESTMENT PROMOTION AGENCY]


The Korea Pavilion has set up a few booths that allow visitor to participate some activities, like making handcrafts such as a Korean traditional lamp and learning Korean calligraphy with a brush and black ink on a white sheet of paper.

After about 30 minutes, visitors are invited to try Korean food at a Korean restaurant located on the second floor of the pavilion. The restaurant, operated by Sonamu, which is located in Asiana Hotel in Dubai, offers various options from traditional dishes like bibimbap, bulgogi, galbi (marinated beef ribs) to Buldak spicy noodles. Korean-style dessert and soju are also on the menu.

Norah Awad, a visitor from Saudi Arabia, picked food as the best experience she had during the exhibition.

“Food was great. I had the galbi with kimchi on the side,” she told to the Korea JoongAng Daily.

As Dubai’s strict law only allows licensed restaurants to sell alcohol, the prices are high. A bottle of Chamisul soju was trading at 68 dirham ($18.5) in the restaurant compared to Korea, where it is offered at around $3.5 per bottle.

Before leaving the pavilion, visitors can stop at a souvenir shop, which carries about 300 items of various traditional products, including cosmetics, face masks and sikhye (rice punch drink). 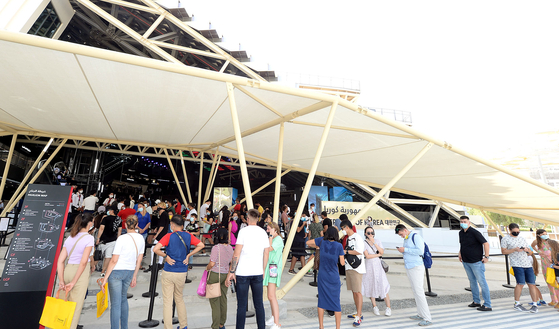 Visitors wait in line in front of the Korea Pavilion on Oct. 1. [KOREA TRADE-INVESTMENT PROMOTION AGENCY]


The most popular item on the opening day was face masks with printed images of BTS members, according to Korail Retail, which runs the shop.

“Excluding Cheong Kwan-jang ginseng, all products being offered at the shop are from Korean small- and mid-sized companies,” said Jung Ho-jin, who runs the shops of Korail Retail. “We intend to help small-sized companies making inroads into overseas market.”

Things not to miss

One of the major events visitors cannot miss during the expo is the Korea National Day, which falls on Jan. 16. Expo 2020 Dubai designated a national day to each country, and on the day, each gets a right to stage a performance in Jubilee Park in the expo site. The park with a stage and garden can accommodate up to 15,000 people a time.


Boy band Stray Kids, who have been appointed as a promotional ambassador of the Korea Pavilion, will hold a concert in Jubilee Park on the Korea National Day. The boy band from JYP Entertainment is popular, with 34 million followers on social media. 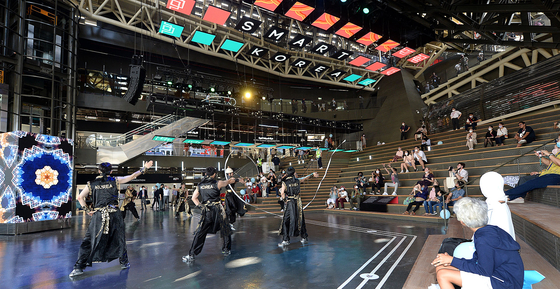 Visitors to the Korea Pavilion watch a performance in the courtyard on Oct. 1. [KOREA TRADE-INVESTMENT PROMOTION AGENCY]


During Korea Week, which follows national day, the Korea Pavilion will hold a Korea Innovative Tech Fair introducing Korea’s innovate industrial technologies from around 50 local big and small-sized companies, though no names have been disclosed. A special performance is planned for Dubai Expo’s outdoor performance theater, Sea Stage.

Tickets to the Expo 2020 Dubai can be purchased on its website. One-day ticket to the expo is priced at $26, while the price of a Season Pass that allows unlimited entries for six months is $135. People under 18 and those over 60 get free tickets.

One step closer to Busan Expo 2030

In order for Korea to successfully host the world expo in 2030, it must win in the final vote during the General Assembly of Paris-based Bureau International des expositions (BIE), which is scheduled to be held in November 2023. A total of 169 member countries of BIE have a right to vote.

The Korea Pavilion operates a separate booth to promote Busan.