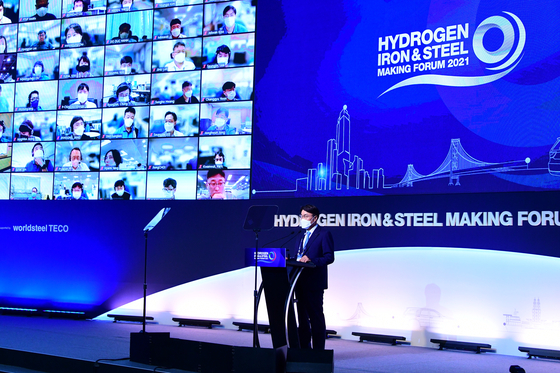 The event, the Hydrogen Iron & Steel making (HyIS) Forum 2021, kicked off at the Grand InterContinental Seoul Parnas in Gangnam, southern Seoul on Wednesday. It will end on Friday.

The forum was held both offline and online.

“I truly welcome the global steel industry’s [effort] to lead carbon neutrality,” said President Moon Jae-in in a congratulatory message delivered in a video. “It is very meaningful that the first HyIS is being held in Seoul.”

“Achieving carbon neutrality in the process of steelmaking can be challenging for an individual country or a company to accomplish,” said Posco CEO Choi Jeong-woo in the opening address of the forum. “But if experts from various fields compete and cooperate, and share the knowledge and experience gained, carbon neutrality in steelmaking can be reached faster than expected.”

Choi added that Posco will lead the green steel era by proposing various agendas and platforms through this forum.

Steel mills have a number of furnaces and subunits involved in the production process that emit carbon dioxide. On average, 1.85 tonnes of carbon dioxide were emitted for every tonne of steel that was produced in 2018, according to data by the World Steel Association. Eight percent of the global carbon dioxide emissions is produced by the steel industry, according to Posco.

On the first day of the forum, methods of hydrogen-based steelmaking and the hydrogen breakthrough ironmaking technology project were introduced at the forum. The project, a cooperation between steelmaker SSAB, mining company LKAB and the energy company Vattenfall, replaces coking coal traditionally needed for iron ore-based steelmaking with fossil-free electricity and hydrogen.

On the second day, infrastructure and resources needed to produce green steel, prospects for the future steel industry and ways for global companies to collaborate are scheduled to be discussed.

Finex is a technology where molten iron is produced directly in a blast furnace. The technology reduces emissions of sulphur oxides, nitrogen oxides and fine dust, according to Posco.