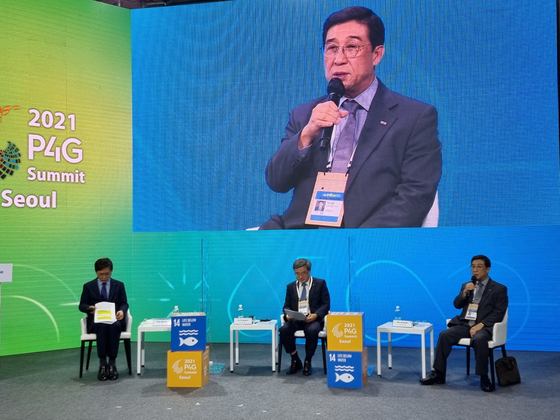 Bae Jae-hoon, HMM CEO, speaks during a session of the Green Future Week at the Dongdaemun Design Plaza in central Seoul on Wednesday. [HMM]


HMM will reduce its carbon dioxide emissions by 50 percent by 2030 and achieve carbon neutrality by 2050.

Bae Jae-hoon, CEO of Korea's largest shipping company, made the pledge during a session of Green Future Week at Dongdaemun Design Plaza in central Seoul on Wednesday.

The event, hosted by the Ministry of Oceans and Fisheries, was held ahead of the two-day Partnering for Green Growth and Global Goals 2030 (P4G) summit in Seoul starting Sunday.

During the session, Bae said HMM has already reduced its carbon dioxide emissions by 40 percent compared to 2008.

He said he will reduce emissions by a half through a Green Energy Efficiency Management system that monitors and analyzes carbon dioxide emissions in real time.

The company will also “continuously buy or rent high-efficiency ships” to improve its energy efficiency and develop alternative fuels, like ammonia, in partnership with other companies, said Bae in a speech.

Ammonia has a high hydrogen density and can be used as a fuel without requiring a hydrogen extraction process, or as a fuel in solid oxide fuel cells.

“HMM plans to actively contribute to the achievement of creating a world with low carbon emissions,” said Bae. “In the shipping industry, carbon reduction is not an option but a must.”