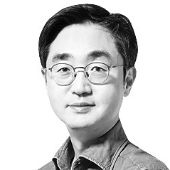 The author is deputy director of business news at the JoongAng Ilbo.


Government officials have started to talk about a looming economic crisis. In a meeting on macroeconomic fiscal policy on September 30, Hong Nam-ki, deputy prime minister for economic affairs and finance minister, warned about a “gray rhino,” a metaphor for obvious threats that slowly move towards us, yet we choose to ignore. The concept is akin to the elephant in the room. The gray rhino can be exemplified by China’s Evergrande Group, which is teetering on the brink of collapse due to its massive liabilities, which stood at $304 billion as of the middle of this year.

A more direct warning came from Jeong Eun-bo, head of the Financial Supervisory Service (FSS), who pointed to the possibility of the perfect storm hitting the Korean economy. When that happens, it can lead to a mega-crisis in the economy, including the financial sector.

Signs of growing risks are clear as seen in the alarming spread of the shocks from supply bottlenecks in all directions. The soaring energy and raw materials prices have dealt a critical blow to China, the factory of the world, which forced a number of factories to suspend their production. After concerns about protracted inflation arose, the rates on U.S. Treasury bonds soared and the global financial markets started to shake.

Federal Reserve Chairman Jerome Powell seemed to back down on his earlier optimism and warned the inflationary pressure, once thought to be temporary, can continue until 2022. If such a situation cannot be addressed, the Fed could raise the benchmark rate faster than expected, he said. That suggests the Fed cannot afford an “orderly retreat” from the excessive liquidity in the market. 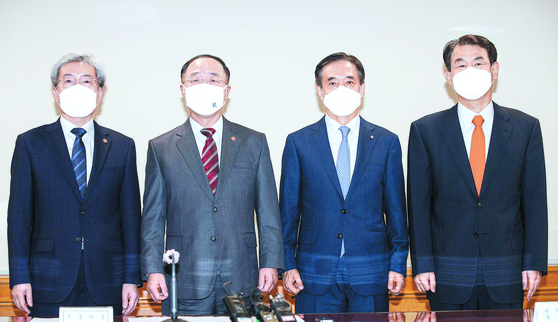 A rate hike domino has already begun in central banks starting with emerging economies like Korea, Russia, Hungary, the Czech Republic, Brazil, Mexico and Chile, They lifted interest rates at least more than once to brace for a capital flight en masse from the Fed’s rate hike. The cautionary move was joined by advanced economies, starting with Norway on Sept. 24.

A perfect storm begins from that spot. If the over-liquidity recedes all at once, massive bubbles on asset markets and gargantuan debts can surface. If big companies like Evergrande collapse one after another, it can trigger a multi-faceted crisis in the real economy and the financial sector.

In his recent economic forecast in the New York Times, Nobel Laureate economist Robert Shiller of Yale University stressed the need for America to prepare for the possibility of property bubble burst. He wrote, “The prices of stocks, bonds and real estate — the three major asset classes in the United States — are all extremely high. In fact, the three have never been this overpriced simultaneously in modern history.” He also warned about an “increased risk of declines over periods of a decade or more.”

The gathering of the deputy prime minister for economic affairs, the governor of the Bank of Korea and other heads of financial authorities reflects the seriousness of the situation. The level of their warnings to the market and investors was unprecedentedly high. Yet they stopped short of presenting tangible solutions except for a promise to find a new way to control ever-growing household debt. Many economists think a short brake on the speed of the household debt increase will not make a difference.

There’s another reason for public distrust with the financial authority. It was actually the government that turned away from the gray rhino. The government inflated the real estate bubble with an unreliable regulation-based approach to the overheated market. The government’s reckless push for experimental housing policies only helped reduce jobs and shut mom-and-pop stores. Then the government resorted to fiscal stimuli to help them to stay afloat. In the process, the country’s ultralow birthrate and rapid ageing deepened as its potential growth rate sharply declined. Yet the government turned away from taking a structural approach to solve the problem.

The Moon Jae-in administration could absorb — and hide — all the shocks mostly thanks to the ultralow interest rate. But the real economy is entering uncharted territory. We don’t know if the country will face the perfect storm. But certainly, the good times are ebbing fast. Korea’s next president will not be able to enjoy the fortune of his predecessor.