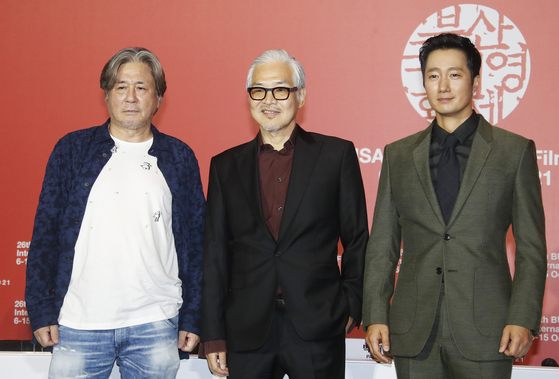 From left, Actor Choi Min-sik, director Im Sang-soo and actor Park Hae-il pose for photos at a press event after the screening of Im’s latest feature “Heaven: To the Land of Happiness” in Busan Cinema Center Wednesday. [NEWS1]


BUSAN — Director Im Sang-soo’s “Heaven: To the Land of Happiness,” which opened the 26th Busan International Film Festival (BIFF) Wednesday, captures Im’s perspective on death, a topic of interest the director has increasingly begun to mull over as he ages.

“The movie, if I were to personify it, is a good, kind one,” Im said at the BIFF press event before the opening ceremony took place, also attended by actors Choi Min-sik and Park Hae-il.

“As I grew older and as I witnessed some of my close acquaintances pass away, I began to give a more thought to death,” Im said.

The narrative tells the story of two fugitives on the run. Prisoner No. 203 (played by Choi) is a long-term prisoner who was diagnosed with a terminal brain tumor, and he meets his unlikely traveling companion, Nam-sik (played by Park) as he makes his break. Nam-sik works as a hospital staff and has an incurable disease that he manages by stealing medicine, in order to stay alive. 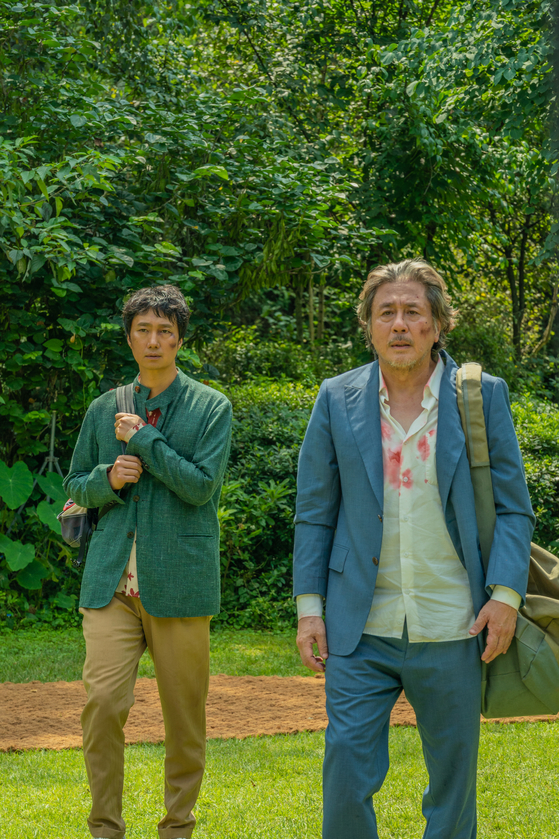 Actors Choi, right, and Park portray two fugitives - prisoner No. 203 and Nam-sik - on the run in “Heaven.” [LOTTE ENTERTAINMENT]


Im relayed that “Heaven” takes on a warmer atmosphere than his prior films such as “The Taste of Money” (2012) or “The Housemaid” (2010), but the idea of money still takes center stage in the story, as No. 203 and Nam-sik accidentally stumble upon an enormous stash of money belonging to a mysterious rich lady called Ms. Yoon (played by actor Youn Yuh-jung).

“I think nowadays, no matter what kind of film [a director] makes, the characters in the stories have to grapple with money one way or another in order to resonate with the audience,” Im said. “But in this film, although the characters run around the country trying to locate the money’s whereabouts, it isn’t revealed who ultimately bags the money in the end.”

Highlights of the film include the scenes complimenting the natural chemistry between the two actors and the oddly tranquil nature scenes that the two men witness as they are on the run.

According to Choi, the two actors’ bonding really derived from all the off-screen time they spent together.

“We drank a lot together,” Choi explained. “At first, we would start off sober, but around eight out of 10 times we would end up talking in this trancelike state in which we barely remember what we’d said to each other. [Park] felt very familiar, in a way.”

Park reminisced, saying “I remember a time once when director Im, Choi and I rented a room for the night, and we had the fiercest of discussions about the scenario. [Due to that night,] we arrived at the set fully prepared — with the build-up of the characters and a thorough understanding of the narrative.”

Im said that he purposefully situated Youn and other female actors in powerful social positions to balance out the gender ratio in his film.

“Since the story is basically rooted to this two men, as a creator who wrote the script and directed the film, I thought I should balance out the [gender] ratio in some other way,” Im said. “So I thought about placing the characters that Youn and actor Lee El take on as the internal cog of the mob, and other important characters such as a police chief or the police officer who tackles No. 203 on the rooftop, as females.”

“Heaven,” along with director Yeon Sang-ho’s “Peninsula” (2020), was also officially selected for the 73rd Cannes Film Festival last year, but the festival was canceled due to the Covid-19 pandemic.

The director also gave his thoughts on the reasons behind the recent global revelation of Korean content focusing on capitalism and social hierarchy, such as Netflix series “Squid Game” (2021) and “Parasite” (2019).

“This film isn’t particularly about social hierarchy,” Im said. “However, I do not think that such social issues are specifically rooted to Korea. It’s a universal problem, and Korean writers and directors have had the guts to point them out directly. I believe that’s what’s appealed [to the global audience].”

Instead of the riches, the film's happy ending derives from personal relationships, Im says.

“The honest truth about life is that no matter how much we attempt to plan out our goals for the future, hardly any of them are achieved,” Im said. “What's left in the end is the warmth from the people we meet along the way as we dither about this way and that to achieve our goals. I believe that’s what life is about.”

Im Sang-soo opening film Heaven: To the Land of Happiness