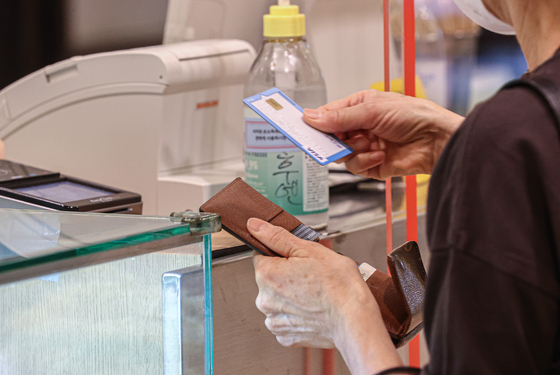 A customer pays in credit card at a store in Seoul on Oct. 1. The government cash-back program started since the beginning of this month. [YONHAP]

Over 11 million people have applied for the government’s cash-back program as of Saturday.

According to the Finance Ministry on Sunday, the 11.43 million people whose application has been completed includes some 110,000 foreigners, accounting for roughly 1 percent of the total.

The refund on this month's spending will be paid to those that applied on Nov. 15.

The amount that is to be refunded through the cash-back program as of Oct. 9 is estimated to be around 9 billion won ($7.6 million).

The Finance Ministry said it expects more to apply.

“The amount of expected refunds is likely to increase significantly in the later part of October,” said a Finance Ministry official.

The government allocated 700 billion won for the cash-back program, funded through a supplementary budget, which kicked off on Oct. 1.

Those that apply will be able to get back 10 percent of any amount spent over 103 percent of their average spending in the second quarter of this year.

The program applies to spending in October and November and is open to anyone that applies regardless of their incomes, including foreigners.

The cash-back refund will be credited to the credit or debit card and must be used by the end of June 2022, which it expires.

The cash-back program is meant to encourage spending, especially at small shops that are struggling under social distancing restrictions.

It is a follow-up to the emergency relief grants of 250,000 won that were given to almost all Koreans except those in the top 12 percent income bracket.

Unlike the emergency relief grant, which had limits on where it could be used, this system is more relaxed.


Starbucks, which the previous grant money could not be used at, will accept payments from this cash-back program.

However, spending at major retailers such as at Emart, Homeplus, Lotte Mart and Costco is excluded. The same is true for spending at department stores, duty free stores and luxury brand stores.

Purchases made on major online malls such as Coupang, Gmarket, SK’s 11st and Shinsegae’s SSG will not be accepted, along with spending at hostess bars and golf courses.