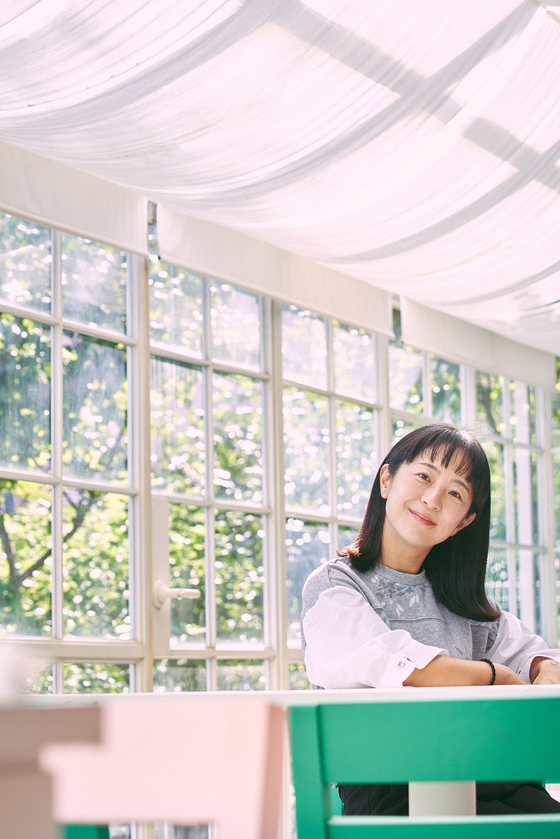 
The surreal, fantasy-like world shown in Netflix’s dystopian hit “Squid Game” is not your average “Alice in Wonderland.” What seems like an amusement park is actually where players struggling with mountains of debt become objects of cruel entertainment, meticulously feeding into contradictory images that leave viewers feeling uneasy.

In an online interview with the Korea JoongAng Daily on Oct. 1, Art Director Chae Kyoung-sun, 42, talked about how the visual aspects of “Squid Game” came to life with some jaw-dropping behind the scene stories. The following are edited excerpts but beware: Spoilers ahead.


Q. What details did you focus on to make “Squid Game” more disturbing?

A. At first, when the director [Hwang Dong-hyuk] and I talked about how we were going to set the visuals for the entire series, we wanted to go down a different path from the original mise-en-scènes in survival games, since “Squid Game” specifically revolves around Korean children's games. Our first goal was to create a childlike and fairy tale-like atmosphere, so it wasn’t a matter of intentionally inserting disturbing and creepy details, but adding movie props that viewers would not expect to see in a thriller where deadly games are being played, like bright, vivid colors or the gift-wrapped coffins. 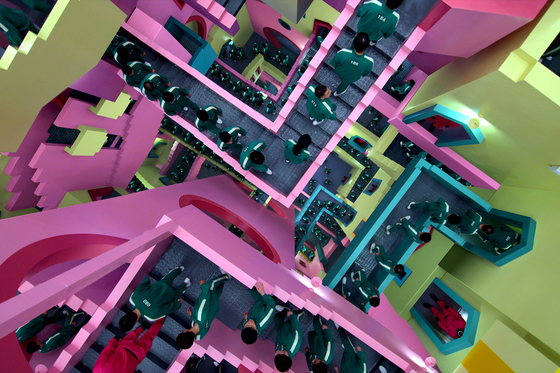 This pink stairway maze, which players walk past to get to a new game, gives ″Alice in Wonderland″ vibes. Chae explains that it follows the general theme of confusion and chaos among the players. [NETFLIX]


How did you come to design the famous “Squid Game” costumes?

We have a person who leads the costume team. Although I do take charge of the overall production designs, we divided into teams for costumes, makeup and special props. We usually came together and discussed what would ultimately be best.


How is the director and the art director’s work divided?

Before getting into production, I received some written explanations from the director on what the plot was going to be like, and my job was to basically foreshadow how the entire series should come to life on camera. I tried to visualize the ideas that were possibly vague inside the director’s head, and constantly discussed with him if the images I drew up were what he intended. I guess you could say that the work [between us] isn’t really strictly divided, but rather we worked hand-in-hand toward the same goal [of making “Squid Game”]. Director Hwang let me stretch my imagination to its extent, and I would tell him my ideas. It was all about being honest with each other and thorough communication. 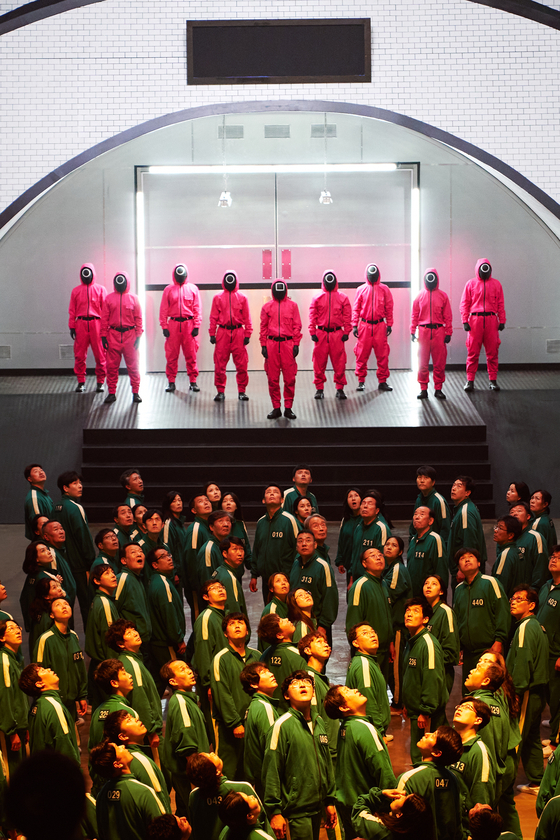 There is meaning to the main colors of the show: green and pink. Green is terrified of pink because it monitors and suppresses green. [NETFLIX]


What is the meaning behind the colors and the shapes?

We decided on a popular green color from the Saemaul Movement [a political initiative launched by President Park Chung Hee] and the tracksuits children wore on field days at school during the 1970s. This may seem retro and kitschy, but they have their own nostalgic charm. We chose pink [as one of the main colors] as well because it is a color frequently used in fairy tales. But we [the production crew] came up with our own meaning [depicted in “Squid Game”]. Green is terrified of pink because it monitors and suppresses green.

And I’ve never mentioned this before, but the hallways of the masked guards’ dorms are painted green, while most of the stairway maze, which the players walk past every time there is a new game, is pink. This symbolizes that the masked guards monitoring and killing the players is just their job. It divides their workplace [the pink maze] and their dorms [where they are not required to “work”] to show that the two spaces are opposite.

For the shapes — the circle, triangle and square — we were inspired by the squid-shaped board drawn on the ground for the actual squid game. You’ll see that there are ranks among the masked guards. The hierarchy is ranked from square, triangle to circle. Did you know that we decided this according to the number of vertexes for each shape? We also planted these shapes in many places throughout the story. I’m sure everyone has already found them in the masks. I won’t give away any details for where the others are; you’ll have to hunt for them yourself (laughs). 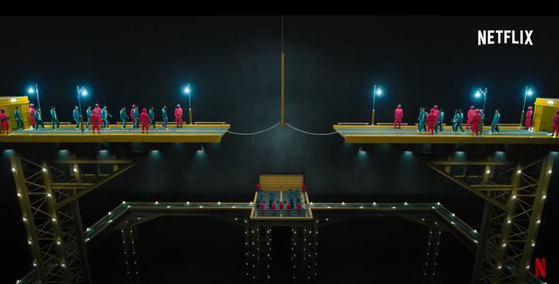 In the tug of war match, the game takes place on top of a disconnected road. Chae explains there was a fixed theme from the start — people who are abandoned and forced to live on the streets. [NETFLIX]


How did you come up with the set designs for each game?

The sets in general, were created to cause confusion and chaos among the players — between reality and fiction.

For example, in “Red Light, Green Light,” I deliberately put a tree without any leaves behind the Young-hee robot to imply that this place was “lifeless.” And the set represents confusion among the players about distinguishing reality and fiction, like the film “The Truman Show” [1998]. Most players at first tend to think that this isn’t reality. Everything seems fake and artificial, so they’re denying the fact that people are actually going to die here. After the first game finishes and hundreds of people have died, the top of the set closes with birds flying out of it. This scene is supposed to make the players realize that this is a game they’re now stuck in [that is separated from the real world], but it isn’t any game, you can’t get out [unlike the birds], so you have to risk your life in order to win inside this fictional world the game operators have made.


What about the tug of war match? Why is the game played on top of a disconnected road?

For the tug of war match, we had a fixed theme from the start — people who are abandoned and forced to live on the streets. These people have mountains of debt, they have families to care for, but they have nowhere to go. So we decided to go with a disconnected blacktop roadway for the set. However, and this is something I’ve never mentioned before, there was one set design we were contemplating whether or not to use right up until production. The game almost took place on the roof of two elementary school buildings! But we were worried, “wouldn’t it be too freaky to play a life-or-death game on top of schools?” It probably would’ve been outrageous if we actually went with that (laughs). 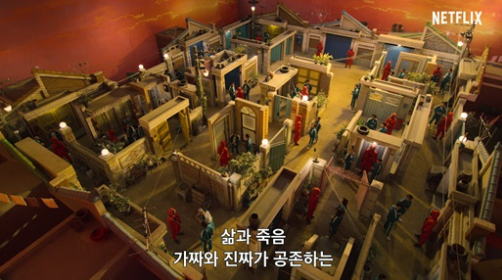 The marbles game is played in a replica of a Korean house with alleyways from the 1970-80s. Chae says that it was her favorite set. [NETFLIX]


You revealed in a production video that the set for the marble game took the most work. What does this set mean to you, and what do you mean when you said you wanted to illustrate “the coexistence of life and death, fiction and reality?”

This set came from the director’s idea of wanting to recall the alleys from his childhood and elicit nostalgia.

In this game, the players partnered up with people they liked and empathized with, like the married couple, thinking they would be on the same side. But then each team was forced to see its losing partner die right on the spot. Survival and death were simultaneously happening in the same place.

And if you see the set from a bird’s-eye view, you’ll see that we arranged two-dimensional sets you see in theater plays and put them together to make the entire set 3-D. So when players open a door they would meet face-to-face with a wall or another door — it symbolizes how the players are placed in a repetitive situation, with nowhere to escape to.

I’m not sure if the viewers caught this, but when Ji-yeong (Player 240) and Kang Sae-byeok (Player 067) sat together and reflected on their pasts, we arranged a flower pot next to each character — one with a dead flower and the other with a live one. Watch the episode again to find out which side each pot is on (laughs). We did this for the other characters too.

We put a lot of small details into the film set to really illustrate the place as if it were really in the 1970-80s, to the point the players would be confused as to whether this was fiction or reality. The sunset [in the scene] was obviously a fake one. And we added many other details as well, like the window sills, the glass panels of the windows, the milk baskets in front of each house and the lighting on the front porches. We made the props we weren’t able to purchase, like the tiles and brick patterns. We even planted the weeds ourselves.

The gates of each house were the essence of this set. We used actual door handles from the 1970-80s and made the overall set seem like actual houses with alleyways of that time. Basically, we wanted to portray the ambivalence of the characters with this set, like how even a good-natured character like Gi-hun (Player 456) ended up showing his darker, selfish side in order to survive. The stage seems real but at the same time, if you look closely, you’ll realize that everything is fake.

I cried after reading the script for [this episode] the first time; it was so heartbreaking. It also took the longest to create this set. Personally, it’s my favorite one. 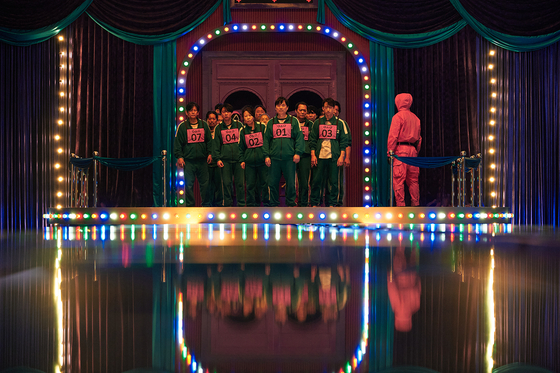 Players ″crack under pressure″ in this glass bridge set, created like a circus where players are the object of cruel entertainment. [NETFLIX]

What makes “Squid Game” different from other projects you’ve worked on in the past?

When I first read the script, I immediately thought, “this is it!” This is a piece where I can finally freely use colors I want to use! I told the director that I wanted to use bright colors you see in fairy tales, and colors from the players’ childhoods.

I’ve worked on a lot of different genres before, like historical dramas. I would say that with “Squid Game,” I was encouraged to use my imagination to its fullest. I didn’t have to worry about production expenses and it was a great opportunity for me to actively try out fresh new designs. It was really fun and an honor to work on the show. I want to thank Netflix and Director Hwang for letting this happen, and honestly I wonder if I will ever be able to work on a piece that beats “Squid Game” in the future. I feel so lucky.