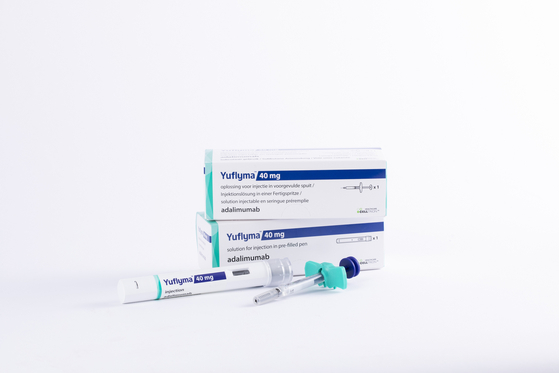 
Celltrion's CT-P17 biosimilar was approved for sale in Korea, the company said Friday.

The drug is an identical copy of adalimumab, better known as Humira, developed by Lake Bluff, Illinois-based AbbVie.

The final nod from the Ministry of Food and Drug Safety came about eight months since European Medicines Agency gave the permission. It is being sold under the brandname "Yuflyma" there.

Humira is prescribed as a treatment for autoimmune diseases including rheumatoid arthritis and Crohn's disease. Last year alone, Humira generated global revenue of around $19.8 billion.

Among Humira biosimilars, Yuflyma is the first high-concentration formulation to receive approval from a drug administrator. High-concentration means that patients can take a half dose compared to competitors.

“Being developed as high-concentration formulation, Yuflyma has enough competitive edge in the domestic adalimumab market,” said Celltrion’s spokesperson. “We will endeavor to supply the treatment in the local market as soon as possible.”

Distribution of Yuflyma in Korea will be handled by Celltrion Pharm.