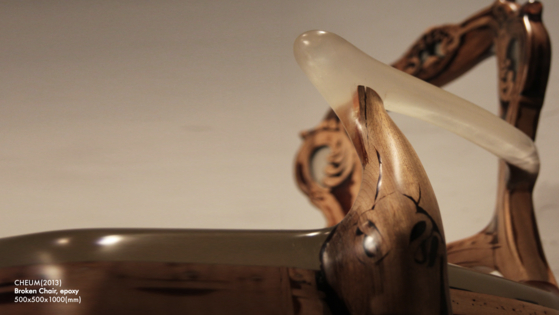 "Cheum" by Fabrikr. The design duo upcycled a broken chair by repairing the damaged parts such as armrests with epoxy. [FABRIKR] 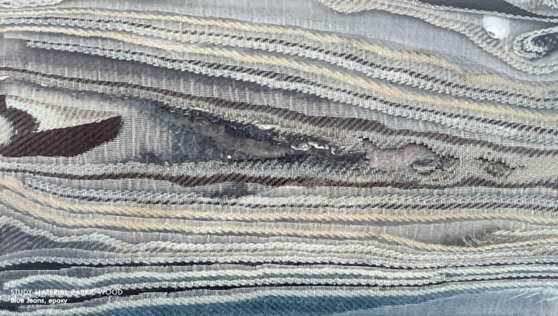 
Fabrikr, a design duo for Onion has been working hard on the construction of the Korean coffee brand’s fourth store in Seoul’s Myeongdong in central Seoul. To prepare for the opening, which will be within the next few months, the designers Kim Sung-jo and Kim Dong-kyu have recently been working hard on making the chairs to accommodate consumers to the new five-story coffee house. 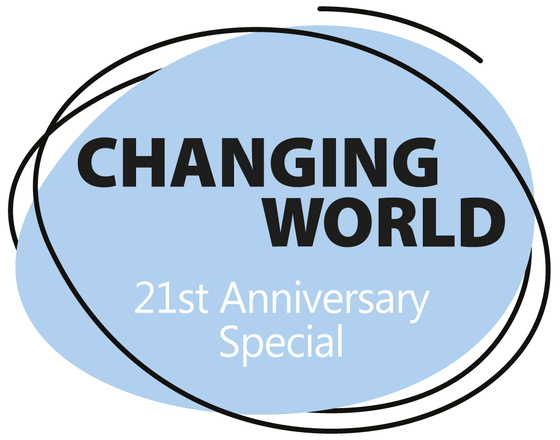 Last week, the designers were layering pieces of discarded jeans on a damaged Eames Molded Plastic Arm Chair, a globally popular chair brand designed by Charles and Ray Eames in 1950. Fabrikr said they were recreating the surface of the shell of the chair as it was heavily damaged. After layering the chair with pieces of colored jeans, the designers will add epoxy, a signature method used by the duo to upcycle abandoned furniture.

Is Fabrikr on that tight of a budget that they can’t afford to purchase new chairs for the new store? (A new Eames Molded Plastic Arm Chair costs more than 1 million won in Korea.)

Like the previous three Onion stores, Fabrikr has been designing every corner of the new branch under the core theme of "sustainability," which the duo says is the “raison d'être of Fabrikr.”

As its name hints, the Fabrikr duo began working with discarded fabric in 2010. Many of their products are created by picking up broken furniture and giving it new life by replacing the broken parts with either fabric or epoxy.

As the fourth Onion store is being established in Myeongdong in hopes of reviving the area, which has been one of the hardest-hit by Covid-19, Fabrikr thought the new store should have a clear message that “adding value to abandoned things can create a greater value."

“Such broken chairs would seem like pieces of junk to some. But for us, they are beautifully designed objects we can work on to reinterpret in our own style and give them new life,” said Kim Sung-jo. 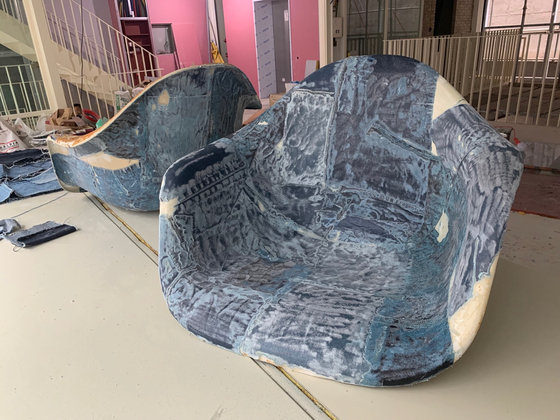 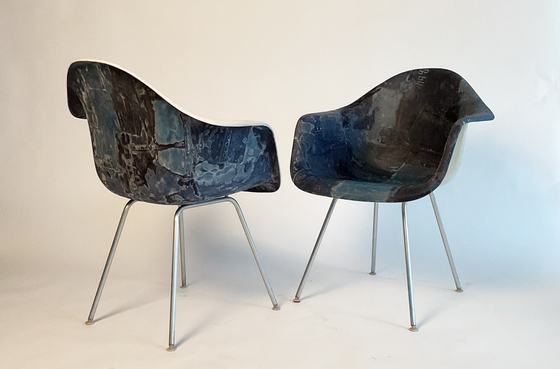 
“It’s such a satisfying job, to be able to do creative activities while minimizing industrial waste and giving new purpose to once abandoned things,” he added.

For this upcycling chair project, Fabrikr has partnered with Tuff, a local furniture studio that sells vintage chairs after repairing and restoring them.

“We didn’t want to pick up just any kind of broken chairs on the streets, but wanted ones that are on a certain aesthetic level,” said Kim Dong-kyu. “In that sense, Tuff is a great partner to work with as the studio imports the vintage chairs they sell.”

Fabrikr, like many upcycling brands, stresses the importance of “sustainability.” Many startups and businesses have been jumping on the upcycling bandwagon, but not many can survive, especially in recent years when there are so many brands that sell similar products like upcycled bags made from recycled plastic bottles and upcycled clothing lines made from fabrics from previous collection’s stock.

“The final product should be aesthetically beautiful. It should appeal to consumers, not just for being an eco-friendly product, but for its function and design,” said Kim Sung-jo. “Otherwise, it’s just creating more trash with trash.”

There are various theories about what true upcycling is, but many environmentalists in Korea as well as upcycling business owners seem to agree that the most important thing is extending the lifespan of a product that was set to be discarded by adding value and eventually bringing about an "upgrade to the environment."

"That is upcycling I believe," said Yu Zu-hyung, CEO of Onion who also manages Fabrikr. “Then the question arises. How can you maximize the lifespan of a product that was supposed to be discarded? The answer is simple. Consumers have to use it for as long as possible. And to do that, the upcycled products should be aesthetically beautiful and well-made so that consumers want to use them for as long as they can."

“In other words, upcycled products should not just have added value, but increase in aesthetic and artistic value so that their lifespan increases infinitely," Yu added.

Lee Eun-sun, a socio-economic professor at Gyeongsang National University of Science and Technology says “the upcycling businesses here experienced a boom many years back but only those that really appealed to general consumers managed to survive."

Lee added that upcycling brands need more than just an "environmentally-friendly mindset" to win the hearts of consumers.

“They need to be sustainable. Environmentally conscious consumers like myself may have purchased such eco-friendly products even though they don't really need them at first just because they like the philosophy behind the brands. But as we become more educated on this issue, we realize that the best way to protect the environment is by extending the lifespan of everything you use and not buying new stuff. So in order for upcycling businesses to be truly sustainable, the products should be as trendy, as eye-catching and as beautiful as other similar competing brands out there." 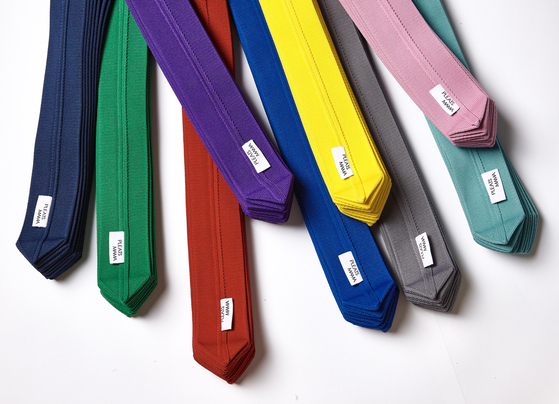 Knitted bags by Pleats Mama. The brand creates its bags from thread that has been made from recycled plastic bottles. [PLEATS MAMA]


Pleats Mama is probably one of the successful upcycling brands in Korea, which has survived in the fiercely competitive market of knitted bags.

Bang Mi-jin, 39, a mother of two living in Seoul, says she bought three Pleats Mama bags because they are “so light, colorful and trendy.”

“At first, I didn’t know it was an environmentally-friendly brand,” she said. “I bought my first one at a gift shop in a hotel in Jeju as I urgently needed an extra bag to carry around during the day. It was so trendy and light that I bought it to carry my kids’ diapers and bottles. I was so satisfied with it that I came back to Seoul and looked up the brand on the internet to buy some more. That’s when I realized it was such an eco-friendly brand. Now whenever there’s an opportunity for me to give someone a present, especially mothers of toddlers, I buy them a Pleats Mama tote or messenger bag.”

The brand creates its bags from thread that has been made from recycled plastic bottles. At first, the brand had to import plastic bottles from other countries as Korean plastic wasn’t good enough to make long fibers. This is because the collection process for recyclable plastic bottles mixed different colored plastic all together.

To stop this ironic effort to protect the environment, Wang Jong-mi, the founder and CEO of Pleats Mama teamed up with Hyosung T&C and launched the Jeju project that collects plastic bottles from Jeju Island. Samdasoo, a best-selling bottled water brand in Jeju helped out by coming up with a collection system. Now with a revised law that makes Koreans separate colorless, transparent plastic bottles without their labels when they are being recycled, Pleats Mama has been using plastic bottles from other regions as well.

Environmentalists also praise Pleats Mama for overcoming its shortcomings, pointing out the brand's efforts as one of the keys to its success.

One environmental activist, who wished to remain anonymous said that she had also criticized Pleats Mama when the brand was importing plastic bottles from overseas.

“No brand is perfect from the beginning. What Pleats Mama did by taking its criticisms seriously, not giving up and figuring out a way to make it work deserves respect,” she said. 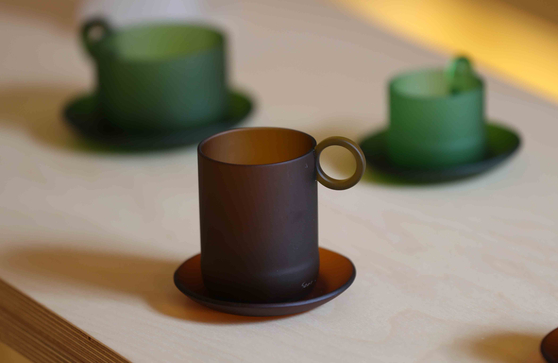 
Her brand’s Re:Bottle project is catching on in the market, and aesthetically, does not fall behind the glassware products of famous designer brands.

After learning that not all glass bottles get recycled, Park decided to use her talent to do something good for the environment. While bottles from local brands in Korea are gathered and recycled, imported bottles are not. That’s because different companies use different types of glass, making it difficult for one company to meltdown another’s glassware and use it to make their own. While local companies are able to reuse their own bottles, imported bottles usually get discarded.

Park says she wanted to make her products aesthetically beautiful so that they can be purchased and used for a long time.

“Some people are confused, and they sometimes perceive upcycled products as low-quality,” said Park. “That’s why I wanted to pay more attention to making them smoother and more beautiful.” 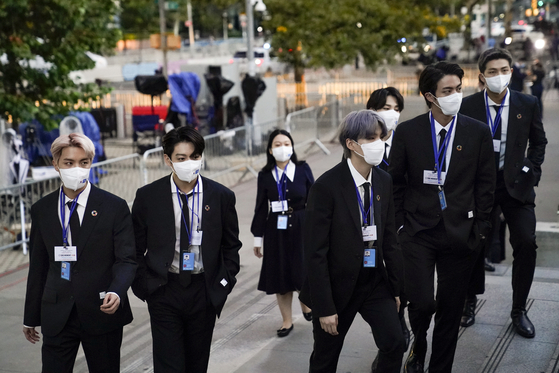 Members of the Korean band BTS arrive to security check-in at United Nations headquarters last month, during the 76th Session of the U.N. General Assembly in New York. They are wearing upcycled suits by Re;code. [AP.YONHAP] 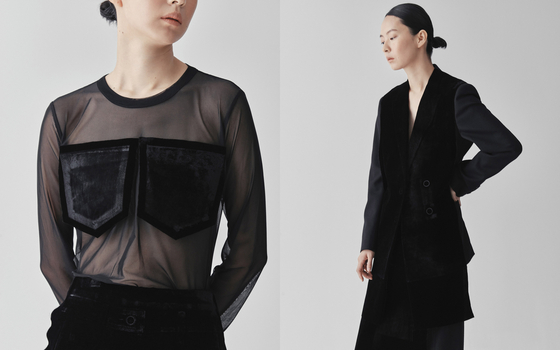 
Korean apparel giant Kolon FnC is one of the earliest fashion companies to launch an upcycling brand. Re;code, founded in 2012, utilizes unsold stock from Kolon FnC fashion brands, dismantling it and producing new designs including clothes, bags and even apparel for dogs. However, during its early years, the designs of Re;code were somewhat ambiguous, not calling out to fashionistas to choose them to incorporate into their outfits of the day.

“I thought they looked so hideous that I didn’t want them anywhere near my wardrobe,” said Park Yu-kyung, 28, who studies fashion and frequently attends Seoul Fashion Week. “But recently, I see a lot of improvements by the brand, collaborating with top designers and so on. I will go take a look since it’s trendy now.”

BTS even wore the upcycled suits by Re;code during their recent visit to the United Nations General Assembly in New York with President Moon Jae-in. A video of the boy band giving a speech and performing “Permission to Dance” at the UN headquarters donned in Re;code has garnered more than 30 million views as of Oct. 13.

"It's always good to see an increasing number of businesses making attempts to think about the environment. The worst case is companies greenwashing, like the recent Starbucks case of distributing reusable cups," said professor Lee. "But we as consumers should also remember that we should ethically spend. In other words, buying an upcycled bag just because you like the idea is also wasting resources. Every product we use, whether it's an upcycled product or not, pollutes the environment. The best way is to purchase an eco-friendly product when you need to replace something, and use it for as long as you can."