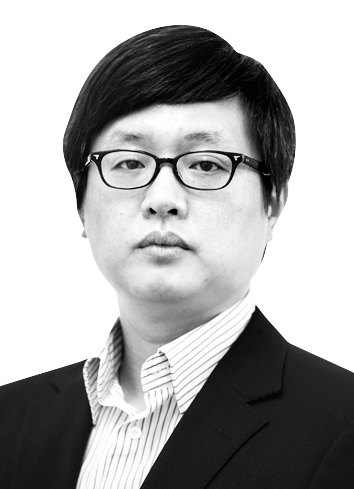 Kim Sung-tak
The author is an editorial writer of the JoongAng Ilbo.


In opinion polls less than five months before next March’s presidential election, Gyeonggi Gov. Lee Jae-myung, the presidential candidate of the ruling Democratic Party (DP), and former Prosecutor Yoon Seok-youl, the presidential frontrunner for the opposition People Power Party (PPP), are fiercely competing for the lead. While Gov. Lee is battling deepening suspicions over his role in a questionable land development project in Seongnam city when he was mayor, Yoon is embroiled in an unusual controversy over his alleged liking for shamanistic practices following repeated slips of the tongue. Quite interestingly, however, such negative factors do not seem to affect people’s support for the two except for minor fluctuations in their approval ratings.

This strange phenomenon likely results from the distance the two candidates have kept from President Moon Jae-in. (In the latest survey, a majority of the people said they wanted a change in the governing power.) The distance they try to maintain from the president reflects growing public disappointment in the Moon administration’s ideology-based policies regardless of their political orientation. A case in point is soaring real estate prices caused by the government’s inability to foresee a market reaction to its stifling regulation-based solutions to control prices. “I’ve never seen a government dare to raise real estate taxes just before by-elections after it continued escalating home prices,” fumed an opposition lawmaker. The Moon administration imposed tough regulations on mortgages to curb speculation, but after it triggered outrage from those who desperately need the loans to buy or rent apartments, the government is busy addressing their vexation. A merchant in Gwangju, home to DP supporters, expressed his hope for a new “president with determination and charisma” instead of a “president with just a warm heart like Moon.” 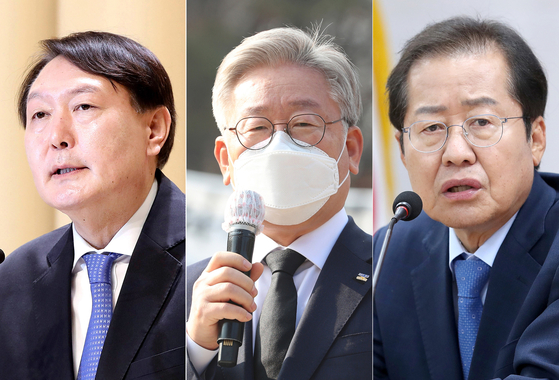 
Both Lee and Yoon have images of leaders with the guts to tackle challenges. As for the mushrooming land development scandal, Gov. Lee agreed to appear at the National Assembly’s audit of the Gyeonggi provincial government on Monday and Wednesday. Despite warnings from DP Chairman Song Young-gil and other party members to avoid the audit, Lee nonchalantly said, “It will be a good opportunity for me to explain the details, achievements and administrative aspects of the project.” Yoon has his challenges too. After he was suspected of instructing a prosecutor to ask the PPP to file accusations against political figures close to the DP as top prosecutor, Yoon launched a counteroffensive. “Please summon me to the legislature. I’ll answer all questions,” he said.

The two candidates’ willingness to tackle suspicions about their pasts — instead of avoiding them — help consolidate their supporters. In fact, Korea’s presidential election is not about picking a candidate with the best qualifications, but about choosing a candidate who is expected to become the final winner even by a slight margin. The two hot-tempered candidates have been proven not only effective defenders of their weaknesses, but also skillful counter-attackers when the need arises. Such boldness is translated into an “ability to weather any crisis,” as political pundits comment. A certain level of constant support they enjoy regardless of various suspicions and mysteries shows reinforcement of support by their followers.

The presidential election on March 9 will likely be a contest between “strongmen.” The PPP has yet to finish the primary to pick its presidential candidate, but Rep. Hong Joon-pyo, currently ranked third among all candidates, is as hot-tempered as the two frontrunners. Hong — a five-term lawmaker for the conservative party, former South Gyeongsang governor, former presidential candidate and a former prosecutor — vehemently attacks both Lee and Yoon by stigmatizing them as members of the “community of crimes.” Another PPP candidate Ryu Seung-min also abandoned his signature “gentle mode” long ago and pointedly attacks any weak spots of his rivals in the PPP primary. Their remaining television debates will be more heated than ever before.

The re-emergence of “strongmen” in Korean politics could help shake up sclerotic officialdom and correct policy errors when they are discovered. At the same time, it can exacerbate social conflict particularly if a head of state with nearly imperial power adheres to one-way communication. To dispel such concerns, they need to herald the advent of the politics of integration and pragmatism by recruiting seasoned players from their rival camps.

The strongman phenomenon has been seen in many parts of the world. Who will be the winner of the next presidential election in Korea will eventually be determined by many who have not yet decided whom to vote for. Gov. Lee must clear suspicions about the land development scandal while Yoon, who spent his entire career in law enforcement, must prove his administrative capability as a leader, and dispel suspicions about his family. On Hong’s part, he must show his relative strength over Gov. Lee in the final match if he is to be elected presidential candidate for the opposition. The era of strongman is making an interesting — yet risky — comeback in Korea.