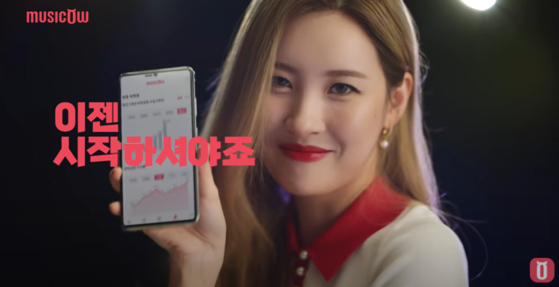 
K-pop, it seems, is as popular with investors as it is with the fans.

The company, which was founded in 2017, is the first in Korea to allow investors to buy fractional ownership in copyrights. Based on agreements with original creators, the company puts a portion of a song’s copyright up for auction, and the highest bidders are allocated a certain number of shares. They can receive a share of royalties and trade the units with other individual investors.

Over 920 songs are available for trading on the website, compared to the 650 available last year.

Rollin’ by Brave Girls was the most heavily traded song on the platform in September, with transactions totaling 2.53 billion won. As of Monday, a share of the song sold for 891,800 won, up 1 percent compared to the previous day. The song sold for 24,000 won per share in February, but rose high as 1,315,000 won on Sept. 1.

With an increasing number of users and music trading gaining attention, the company has been attracting investment.

In June, it raised 17 billion won in Series C Funding led by Korea Development Bank. LB Investment, visual effects company Wysiwyg Studio and the Korea Growth Investment Corp also joined the round. Hanwha Asset Management provided another 7 billion won in funding in January. In July, the company was selected by the Ministry of SMEs and Startups as a “preliminary unicorn,” a company valued over 100 billion won but less than 1 trillion won.