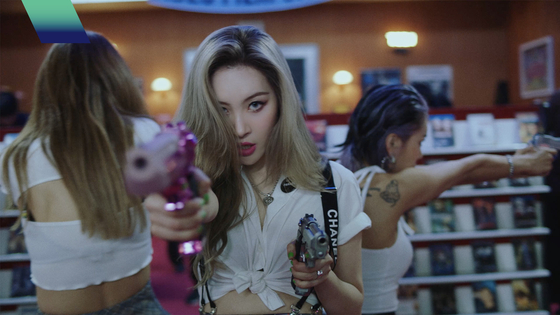 
K-pop singer Sunmi, whose real name is Lee Sun-mi, plays the role of a teenager fighting zombies in a music video for her new song "You Can't Sit with Us." The music video clocked 10 million views on YouTube in the first day after its release, her agency Abyss Company said Sunday. As the main track of her third EP "1/6," the song was released at 6 p.m. on Friday and reached the 10 million view milestone at 6:10 p.m. on Saturday, according to the agency. The video was inspired by the year 2000, Sunmi said in an online media showcase on Friday. The singer added that the song is more “light and cheerful” than her former songs, so she hopes it will cheer up people tired from the pandemic.  [ILGAN SPORTS]