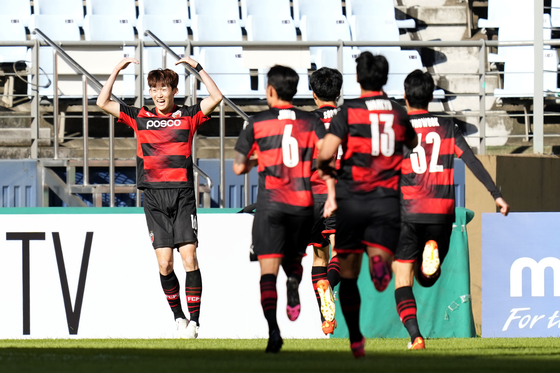 
Ulsan Hyundai and the Pohang Steelers will face each other in the semifinals of the AFC Champions League after winning their respective quarterfinals at Jeonju World Cup Stadium in Jeonju, North Jeolla on Sunday.

The Steelers were up first, taking on Japanese side Nagoya Grampus at 2 p.m. Despite having twice failed to beat Grampus during the group stage of the tournament — losing the first game 3-0 and drawing the second 1-1 — Pohang put on a dominant performance on Sunday to win the all-important match 3-0.

Lim Sang-hyub opened the scoring for Pohang in the 53rd minute, picking up a deflection from the goalkeeper and sending it home.

Lee Seung-mo took the score to 2-0 in the 70th minute, running through the defense before volleying the ball past goalkeeper. Lim returned for a brace during injury time, chipping the ball over the outstretched hands of the Nagoya keeper.

With the win, the Steelers advance to the semifinals of the AFC Champions League on Wednesday.

Pohang will be joined in the semifinal by reigning champion Ulsan, who beat long-term rivals Jeonbuk Hyundai Motor 3-2 on Sunday.

Sparks were expected to fly in the showdown between the K League's two top clubs, and neither team disappointed.

Valeri Qazaishvili opened the scoring for Ulsan, scoring a fantastic left-footed shot after dribbling his way through the defense. Jeonbuk's Han Kyo-won equalized in the 39th minute, before Yun Il-lok put Ulsan ahead again in injury time at the end of the first half.

Jeonbuk equalized again immediately after half time, leveling the plying field at 2-2. The two sides traded chances for the next hour, with Ulsan's Lee Dong-gyeong finally breaking through in the 101st minute.

Lee's dramatic extra time goal put Ulsan ahead with style, hammering the ball past the keeper and into the top left corner of the goal. Jeonbuk continued pushing for another equalizer throughout the rest of extra time, but Lee's goal had given the reigning champions an unassailable lead.

As the top team in the K League 1, Ulsan are still on track to become the first Korean football team ever to win a treble — league title, FA Cup and Champions League. Ulsan currently lead the league and are through to the semifinals in both FA Cup and the Champions League.

Ulsan and Pohang have faced each other three times in the K League 1 this year, drawing one and Ulsan winning two.