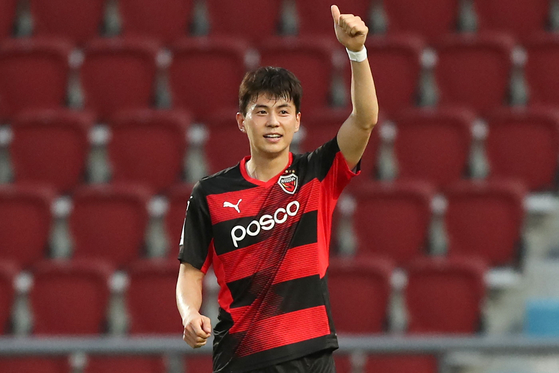 
The Pohang Steelers won the opening game of the eastern leg of the 2021 AFC Champions League group stage on Tuesday, beating Ratchaburi FC 2-0.

The Korean side got started quickly, with Ukrainian import Borys Tashchy scoring the opener at Rajamangala Stadium in Bangkok, Thailand, in just 11 minutes.

Tashchy picked up a cross from midfielder Manuel Palacios in the box, heading it past the Ratchaburi keeper and straight into the back of the net.

Pohang had to wait until the last few minutes of the game for number two, when Lim Sang-hyub dribbled into the box from the left wing, turned on the spot and hammered the ball through six defenders and into the top right corner for a decisive insurance goal.

Lim's goal was the final nail in the coffin for the Thai side, and the Steelers walked away from their first 2021 AFC Champions League clash up 2-0.

Elsewhere in Group G, Nagoya Grampus of Japan beat Johor Darul Ta'zim of Malaysia 1-0, putting the Steelers at the top of the group on goal difference.

Pohang will now face Nagoya on June 25 and Johor on June 28. The four teams will then play each other again, completing the group stage by July 7. All games will be played at Rajamangala Stadium.

Jeonbuk Hyundai Motors will also be in action on June 25 in their first Group H match against Chiangrai United of Thailand. They will be playing their games in Tashkent, Uzbekistan.

Ulsan Hyundai and Daegu FC will both begin their campaigns on June 26.