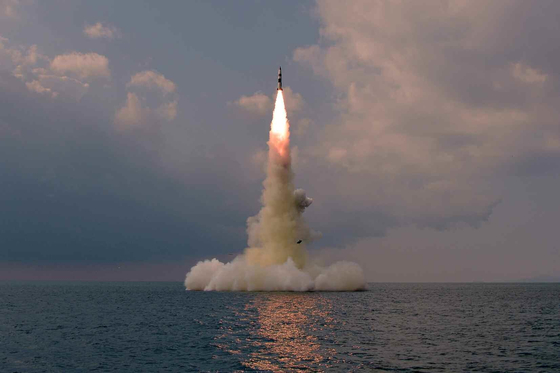 North Korean state media said the country successfully launched a new ballistic missile from a submarine, which would be a significant increase in the country's attack capabilities.

But it made a similar claim in 2016 that was disputed by foreign and South Korean defense analysts.

The Korean Central News Agency (KCNA) reported Wednesday that the Academy of National Defense Science test-fired a "new type" submarine-launched ballistic missile (SLBM) on Tuesday from the "8.24 Yongung ship," referring to an existing submarine that it claimed had tested an older SLBM in 2016.

South Korea's Joint Chiefs of Staff (JCS) confirmed Tuesday that North Korea fired a suspected SLBM at around 10:17 a.m. that morning from the vicinity of North Korea's eastern port city of Sinpo, South Hamgyong Province, into the East Sea.

However, South Korean military authorities were not immediately able to confirm if the SLBM was launched from a submarine or a submersible barge, as in previous tests.

The English-language KCNA report claimed that the first SLBM was "successfully launched five years ago to demonstrate the military muscle of the DPRK" from the "8.24 Yongung" submarine, referring to the acronym for the North's official name, the Democratic People's Republic of Korea.

In August 2016, North Korea claimed it had successfully launched an SLBM from waters off the coast of Sinpo, the site of a submarine base. It did test-fire a Pukguksong-1 ballistic missile, which flew about 500 kilometers toward the East Sea, on Aug. 24, 2016.

At the time, South Korean and U.S. officials and experts said the SLBM appeared to be launched from a barge, rather than a submarine.

North Korean state media released a photo Wednesday of a 2,000-ton submarine marked "824" in white letters. The submarine appears to be the same one that supposedly launched the SLBM on Aug. 24, 2016, and the white letters are meant to celebrate that feat. The "Yongung" in its name means "hero" in Korean. 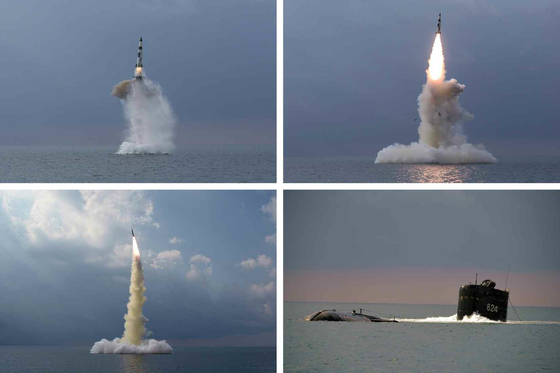 The new weapon appears to be a mini-SLBM first unveiled at a defense exhibition held in Pyongyang last week to mark the 76th anniversary of the founding of the North's ruling Workers' Party.

News of the SLBM launch and multiple photos were also reported on Page 2 of the state-run Rodong Sinmun Wednesday. The photos released by the North appear to show a thinner and smaller missile than the previous models.

The KCNA reported that the new type SLBM had "lots of advanced control guidance technologies including flank mobility and gliding skip mobility" and "will greatly contribute to putting the defense technology of the country on a high level and to enhancing the underwater operational capability of our navy."

Such skip-glide technology could be used to change the missile's trajectory, making it harder to track and intercept.

Some defense experts described the new smaller-size SLBM as appearing to be an advanced version of the North's KN-23 Iskander short-range ballistic missile based on its design.

The latest ballistic missile was estimated to have an apogee of 60 kilometers and a flight range of around 590 kilometers, according to South Korea military officials.

Kim has not personally watched any of the North's eight weapons tests this year, possibly to avoid inflaming tensions with Washington.

The North began testing SLBMs in 2015. Successfully launching a ballistic missile from a moving submarine would indicate that Pyongyang is closer to being able to deliver nuclear warheads by SLBMS, which experts consider a "game changer," as it is a stealthier method than intercontinental ballistic missiles (ICBMs), and therefore pose a new threat to the United States and its allies.

South Korea test-fired an indigenously designed SLBM from a 3,000-ton submarine last month, becoming the seventh country to possess SLBM capabilities. North Korea's mention of its 2016 SLBM test as being its first from a submarine could be seen as a put-down of South Korea's SLBM test on Sept. 7.

North Korea's SLBM launch Tuesday was its highest-profile weapons test since U.S. President Joe Biden took office in January. It occurred as a closed-door meeting of South Korean, U.S. and Japanese intelligence officials was underway in Seoul Tuesday and the three countries' top nuclear envoys were gathered in Washington for a trilateral meeting on North Korea issues.

"We call on the DPRK to refrain from further provocations and engage in sustained and substantive dialogue," said White House Press Secretary Jen Psaki in a briefing Tuesday. "These launches also underscore the urgent need for dialogue and diplomacy."

She added, "Our offer remains to meet anywhere, anytime, without preconditions."

The UN Security Council was scheduled to hold an emergency closed-door meeting on the North's latest launch on Wednesday in New York.