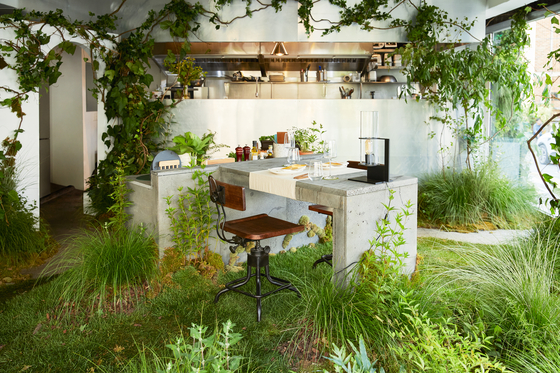 
Vegan options on the menu at restaurants and cafes in Seoul are no longer hard to come by.

With more people turning to healthier eating habits and paying attention to animal rights and climate change, a big contributor of which is carbon emissions from livestock farms, mom-and-pop stores, large conglomerates and everyone in between are finding their ways to develop and incorporate more vegan food options.

According to Korea Vegan Union, it is estimated that Korea has about 1.5 to 2 million people who call themselves a vegetarian or vegan — all together about 3 to 4 percent of Korea's population of just over 50 million. The union estimates about a third of the population, though not strictly refraining from animal products as a vegetarian or vegan would, does prefer or enjoy vegetarian meals or dishes.

“When food companies come up with product ideas, they don’t solely target the vegetarian population, but rather those who eat vegetarian or vegan meals just when they want to,” said 25-year vegan Lee Won-bok, founder and president of Korea Vegan Union. The union, established in 2000, shares information about vegetarian and vegan diets for anyone interested.

“Many millennials and Generation Z seem to give more thought to trying the vegetarian diet, and we expect that such an interest isn’t something temporary, but something that will last for some time.”

This interest would lead them to purchase products that may not be widely available or popular, he said, and more choices available in the market these days have been making it more fun for them as they try different products.

Testimonies of celebrities online saying they tried out a vegan option for their meal also act as a driving force to inspire many to at least try new types of food, just like their favorite star did. Actor Im Soo-jung has been on a plant-based diet for six years, and Shownu of Monsta X has shared that he is trying to eat more like a vegan.

Starbucks last month announced that oat milk is now available as a substitute for animal milk at all branches. The introduction of the new plant-based substitute comes for the first time in 16 years, after the coffee franchise adopted soy milk as a basic option in 2005. Some special drinks, however, like the oatmeal latte or oat green tea latte, did use oat milk since 2017 as a main ingredient. Besides oat milk, the chain has been introducing more plant-based foods including sandwiches and brownies.

Burger and sandwich joints have also been making their move. Although currently off the menu, Burger King previously introduced its steady seller Whopper made with a plant-based patty in February. Following the release, many rushed to the store and shared their reviews on social media. Lotteria, around the same time, also unveiled its plant-based Sweet Earth Awesome Burger. Last year, Subway also released its Altermeat Sub made with a meat alternative. 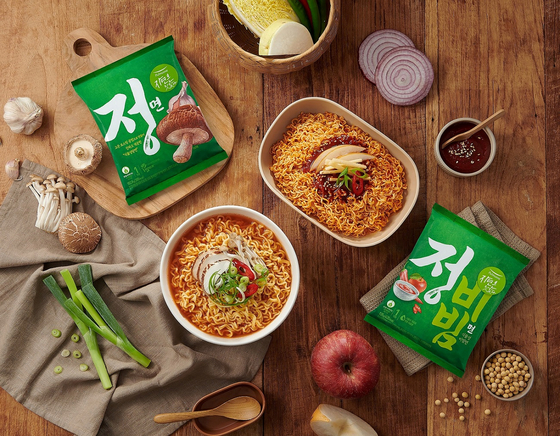 
Food companies continue to test the waters to see what kinds of vegan or vegetarian products receive the best reaction from customers. Pulmuone has sold over 4.2 million packages of its new vegan ramyeon Jung as of July, which was first released in August 2020. The company’s plant-based vegan yogurt Activia, since its release in January, has sold over 1 million cups as of May.

Nongshim, best known for its ramyeon, launched a new brand called Veggie Garden earlier this year and has introduced around 30 vegan products ranging from cheese and sauce to meat alternatives. It is preparing to open a vegan restaurant with dishes featuring its products to better introduce the vegan diet to anyone new to or interested in vegan food. The restaurant is expected to open sometime next year.

“For a food company, we have decided that the vegan market has a potential to grow further given the cases from overseas where the vegan market had grown much more compared to Korea's, which is still in the beginning stage,” said a Nongshim official. “Whether for a healthier diet or for protecting animals and preserving the environment, more are speaking up about their vegan choices both online and offline, so we are trying to make the vegan food idea more easily approachable.”

According to the Nongshim official, the main consumers are women in their 20s to 40s, and they tend to purchase items that go well with Korean food. The company has been trying to source more of its products to markets and stores these women frequent, including The Hyundai in Yeouido, western Seoul, and online platforms such as Market Kurly and Coupang. 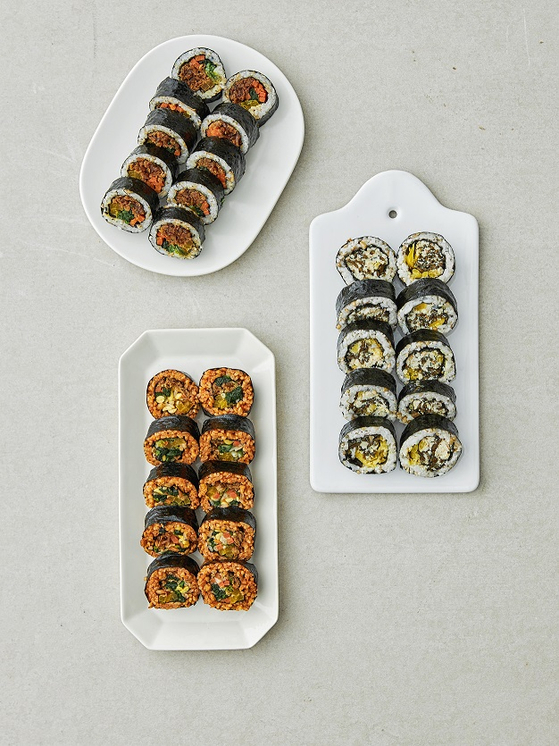 
When you search "vegan" on Market Kurly, one of the popular mobile applications for grocery shopping in Korea, various results come up, ranging from frozen gimbap and dumplings to bread, jerky and cheese — all which will be delivered the next morning after you check out.

“I love fish so much, so I can’t completely cut that out and be a vegan, but I do think about balance in my nutrition, so I started to have at least one meal a day be vegan,” said Keys of Mangwon-dong in Mapo District, western Seoul, who started doing so since June.

“I am happy with one vegan meal a day as that’s something I can start with at the moment, and I share my experience on new vegan products I try with others and they usually welcome the information.”

A hot topic in vegan food currently is Just Egg, an egg-substitute made from mung beans. It will soon be available at local supermarkets as the brand’s Korean partner SPC is currently building a factory to locally manufacture the artificial egg so that it can distribute to restaurants that want to make vegan dishes and to individual households looking for a quick vegan substitute. 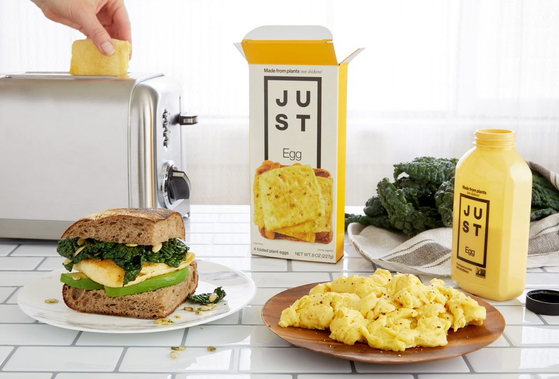 Sample dishes made with egg substitute Just Egg are featured on a table. [JUST EGG]

Paris Baguette, under the umbrella of SPC, has already started making a sandwich using Just Egg. The yellow liquid, that was produced to look like runny egg yolks, comes in a yellow squeezy tube, easy to make scrambled eggs with.

In order to familiarize the people in Korea with its non-egg substitute, prior to the still to-be-decided product launch, Just Egg put together an event to invite vegans and food industry experts to sample how versatile the product can be. Three local chefs with different culinary backgrounds were invited to create dishes using Just Egg last month, and they used it in their dishes just like they would use a real egg — steaming it or scrambling it with veggies. Some even used it to make noodles or crepe dough.

The event was to show and spread the word on how different recipes that people already commonly eat at home can be easily be made vegan with just a quick swap.

“Being vegan doesn’t mean you have to give up eating your favorite dishes,” said Kim Hyo-yeon, who has been vegan for four years and has been holding weekly talks with fellow vegans on Clubhouse for about eight months. She added that there are many substitutes for different sources of protein, such as meat, chicken and even seafood, and such products can be a good stepping stone for those who want a more smooth, less abrupt transition to the vegan diet or who just want to expand their vegan food arsenal. 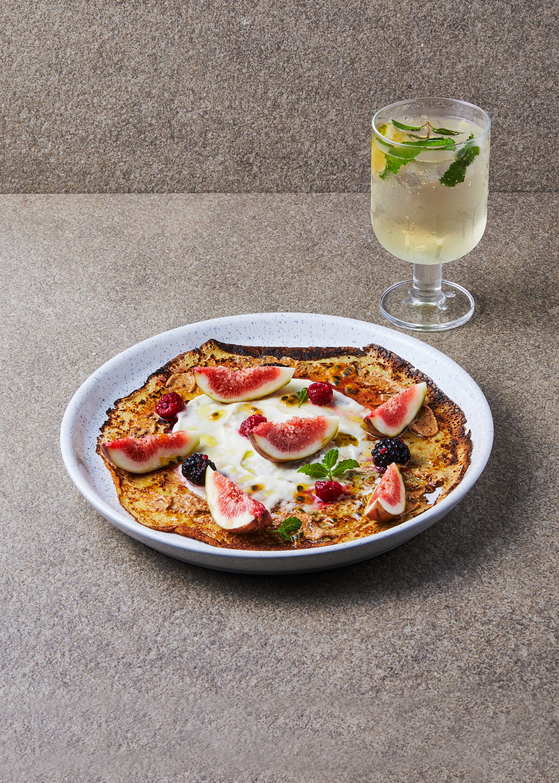 Crepe with fig; the crepe dough is made with Just Egg. [JUST EGG]

Sales of plant-based items have shot up at convenience store chain CU. From January to July this year, the sales of these products jumped by 15 times compared to the same time last year. As of August, many of its stores carry around 10 different vegan options, ranging from instant ramyeon to vegan beef jerky snacks — up from about three items the stores used to offer the year before.

“As increased attention is being given to healthier diets and animal welfare by our customers, we, as a store located close to customers wherever they live, wanted to offer vegetarian options at more affordable prices,” said manager Jo Seong-uk of BGF Retail that runs CU. 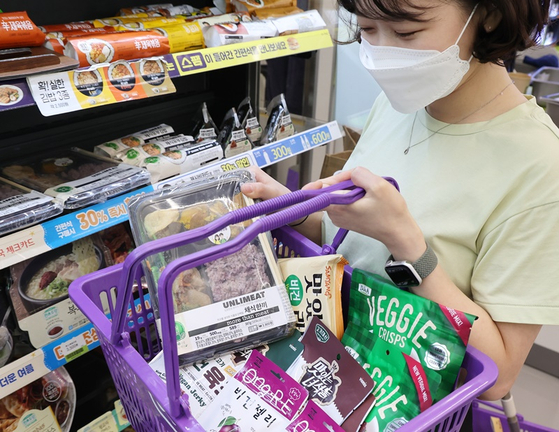 A customer shops for vegan items at a CU convenience store. [CU]


According to CU, the market for meat substitutes is about 20 billion won ($16.9 million), and is expected to grow further as more food companies and restaurant franchises introduce a variety of these products. CU collaborated with Zikooin Company, a local start-up that produces the meat substitute, Unlimeat, to make vegan-friendly triangle-shaped gimbap and more.

Competitor convenience chain GS25 has also said its sales of vegan items from January to July this year jumped by 18 times from the same time last year. It plans to expand the number of vegan products it provides to 30 within this year, from 15 as of July. It started with vegan ice cream and then started offering more items like gummies or mushroom chips.

Luxury five-star hotels in Seoul are working to offer more vegan options to cater to all sorts of guests.

Grand InterContinental Seoul Parnas offered a vegan take on one of its major summer delights, bingsu, or a shaved ice dessert, by using almond milk, topped with prunes, granola and dates — coming in with a price tag of 45,000 won for a larger two-person bingsu and 27,000 won for a smaller one-person serving. It also offers burgers using the Beyond Meat meat substitute for 38,000, paired with vegan beer. A bottle starts at 14,000 won. 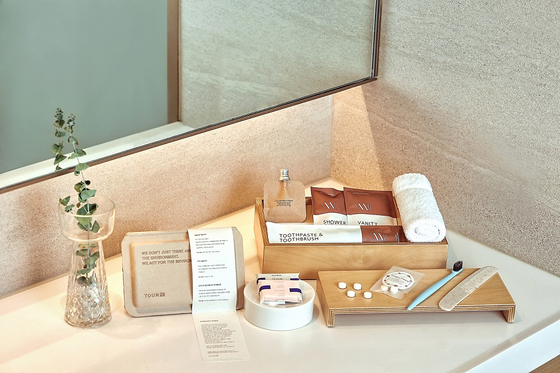 
Grand Walkerhill Hotel in Gwangjin District, eastern Seoul, goes beyond just the culinary aspect to make vegan rooms for those who choose to stay overnight, with its new package “Begin Vegan.” Refraining from the use of any products related to animals, the vegan room is equipped with furniture made with paper leather and eco-friendly bedding, such as pillows filled with vegan-certified filling instead of goose feathers. All cosmetic items prepared in the room are vegan as well. The vegan breakfast, vegan wine and vegan mini bar are also offered. Prices for the package start at 360,000 won.

The hotel also provides rooms with an indoor cycling machine so that guests, if they choose, can generate electricity to charge their smart devices by pedaling during their stay.

“Some of the items, like paper leather or vegetable filling for pillows, may not be something people have access to in their everyday life,” a representative of the hotel said. “We hope people leave more inspired to help others who are trying to lead the way to make eco-friendly changes.”