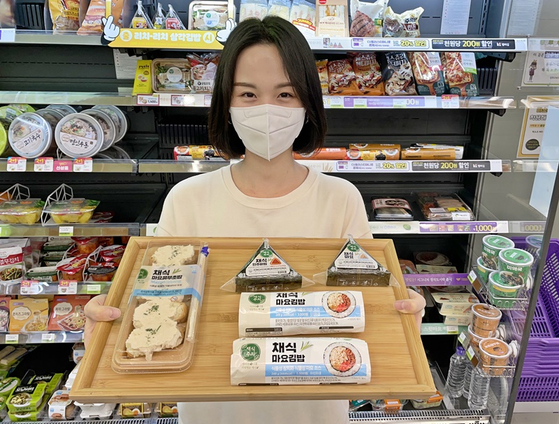 A model poses for a photo with CU's vegan products. [BGF RETAIL]

"I'm not a vegan but like to eat vegan food since it's known to be good for health," Sohn said. "Convenience stores offer various options. They taste good and are also very convenient to consume."

With vegan food becoming popular, convenience stores are scrambling to come up with items that are vegan in an effort to meet growing demand.

"We developed vegan tuna, which tastes similar to regular tuna, but is made with beans instead of fish, and mixed it with vegan mayonnaise," said a spokesperson for CU.

The convenience store has also come up with Jeonju Bibim samgak gimbap, which comes with gochujang (hot pepper paste) sauce mixed with plant-based meat alternatives. It retails for 1,300 won. 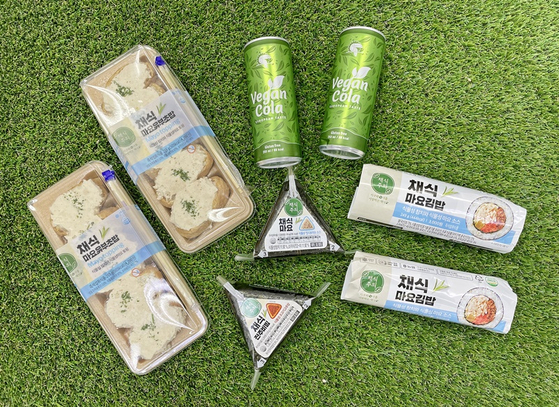 
"Previously, I had to find expensive restaurants to have vegan meals," 25-year-old Kim Soo-min said. "But now I can easily find them in convenience stores. It's very comfortable."

"The vegan products, which were first released in order to satisfy a certain group of people, went viral and have been gaining popularity from both vegans and general customers," said Kim Yoo-kyeong, a merchandiser at BGF Retail, the operator of CU.

Its sales of vegan products this year through July jumped 18-fold on year.

"Vegan products like chips are very well liked by vegans, as well as general customers who wish to consume healthy food," said Jeong Byeong-su, a merchandiser at GS Retail, the operator of GS25.