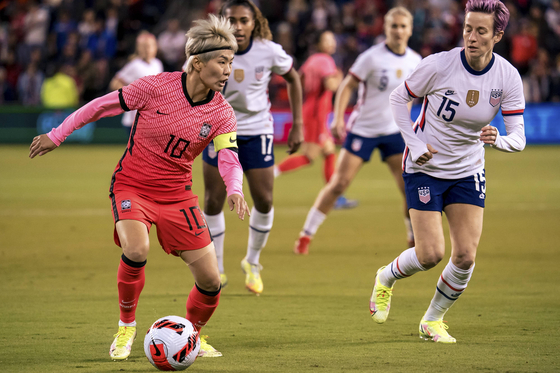 Korea's Ji So-yun takes the ball away from Megan Rapinoe of the United States during the first half of a friendly at Children's Mercy Park in Kansas City, Kansas on Thursday. [AFP/YONHAP]


The women's national football team will look to build on last week's draw as they face the United States in the second of two friendlies on Tuesday, or on Wednesday morning in Korea.

Korea, ranked at No. 18 in the world, managed to hold the world-leading United States to a 0-0 draw at Children's Mercy Park in Kansas City, Kansas last week.

As expected, the United States dominated the match, but goalkeeper Yoon Young-geul and the Korean defense proved up to the challenge, stopping a total of 19 shots, eight of which were on target.

Korea didn't stay quiet in that game either, racking up eight shots on goal, one of them on target. With the draw, Korea snapped the United States' 22-game at-home winning streak.

The United States were always going to present a formidable challenge for Korea. The two sides have faced each other a total of 14 times including last week's game, with Korea still unable to enter the win column. Since their first game in 1997, which ended in a big 7-0 loss, Korea have tied with the United States four times and lost on all other occasions. All 14 matches took place on American soil and Korea have only been able to score five goals to the United States’ 43.

The friendlies against the United States serve as a warmup for Korea ahead of the 2022 Asian Football Confederation Women's Asian Cup in India next January, where the Taeguk Ladies will be looking to earn their third Women's World Cup ticket.

In Korea’s match against Mongolia, Ji So-yun scored her 59th goal to become Korea’s all-time leading goal scorer across all teams, all divisions, all genders and all competitions with Cho So-hyun and Lee Geum-min each adding two goals in the same match.

Speaking after the game against the United States last week, captain Ji was optimistic about the team's performance.

"It was a very difficult game," Ji was quoted as saying. "Still, all the players played hard until the end and were able to play to a draw."

Ji admitted she concentrated on playing defensively in the first game, but is looking to do more this week.

"I mainly played defensive, but if I had gone out faster when I counterattacked, I could have made better chances," she said.

Korea will face the United States at Allianz Field in St. Paul, Minnesota on Tuesday evening, or at 9 a.m. on Wednesday morning in Korea.