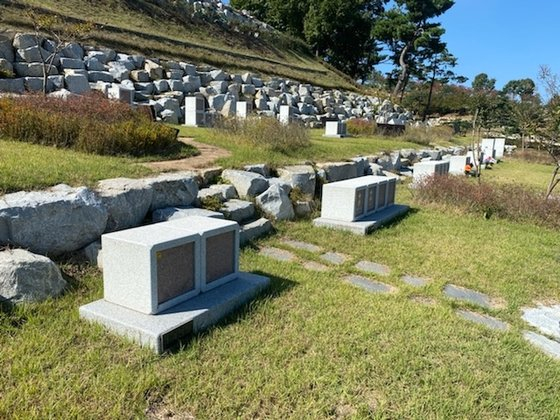 The cemetery park pictured here in Gunwi County, North Gyeongsang, will begin construction next month to create around 500 burial plots for Daegu Catholic University’s major donors and their spouses in honor of their sizable donations. [DAEGU CATHOLIC UNIVERSITY] 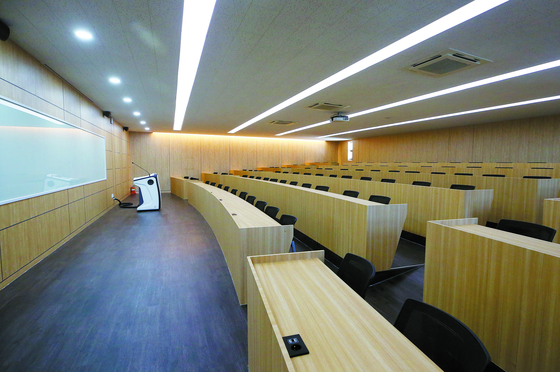 A lecture hall at a provincial university is left unused for the school year as some classes have been canceled due to a lack of students. For the spring semester of 2021, 162 out of 339 universities were unable to fulfil their student quotas, according to the Ministry of Education. [YONHAP]


Daegu Catholic University took a practical approach to attracting major donors once it found itself strapped for money and unable to fulfill its annual student quota, by offering them thank-you gifts of burial plots.

The string of donations came after Woo’s announcement earlier this month to give a 20-square-foot patch of land at a cemetery park to donors who make a sizable contribution of more than 100 million won ($87,700) to the school’s development fund.

The university’s idea to attract donations came after an unfulfilled student quota for its 2021 spring admissions, with only 84 percent of the total satisfied.

Preparation for the new burial spaces will begin next month at a cemetery park located in Gunwi County, North Gyeongsang.

The space will hold about 500 bodies and both the donor and the donor’s spouse will be eligible for a plot each.

Donors will be able to choose their own plots on a first-donate, first-serve basis, according to Daegu Catholic University.

“Since early this year, our school has been under emergency mode to gather money,” said Baek Seung-hwan, director of external affairs at Daegu Catholic University. “During such difficult times for the nation’s universities, we are glad to be able to honor our valued donors.”

Universities across the nation are grappling for survival as the younger academic population wanes and schools are unable to meet the required student quotas. Schools can operate without meeting their quotas, but since 50 percent of schools’ finances come from its students’ tuition, this ability to satisfy the quota is critical for an institution to stay in operation.

This year, a total of 162 four-year universities failed to meet their student quotas, with 75 percent of the 40,586 vacancies occurring in provincial universities outside of Seoul, according to the Ministry of Education’s 2021 University’s Student Quota Analysis.

Amid such a dearth of students, Korea’s provincial universities, like Daegu Catholic University, are getting creative to make ends meet.

Hannam University in Daejeon is hosting a donation relay among its faculty members.

Daegu Haany University is running a donation campaign called “The Guardian Angels” which aims to collect donations from 10,000 alumni.

National flagship universities outside the capital are also not exempt from the financial struggles.

Pusan University is implementing an online donation system that will allow its donors to give money to the school during any hour of the day, without the inconvenience of visiting a bank.

“With less students enrolling each year, the downtrend of donations can put the school in a real crisis.”

While the financial struggles of provincial universities are projected to only be further exacerbated in the coming years, experts point out that the government is focused only on assisting schools within the greater Seoul area.

According to a report titled Financial Analysis of Universities, by the Korea Advancing Schools Foundation, only 35 percent, or 1.52 trillion won, out of the 4.35-trillion-won government budget for university support was allocated to provincial universities in 2019.

This means that universities within the greater Seoul area received an average of 27.5 billion won of government funds while provincial schools received on average 18.5 billion won.

“While government support funds for universities have expanded over the years, they have largely been focused on helping the institutions in Seoul,” said Seo Dong-yong, member of the National Assembly Board of Education.

“The government needs to review its policies on university support funds and revise them to be more comprehensive.”