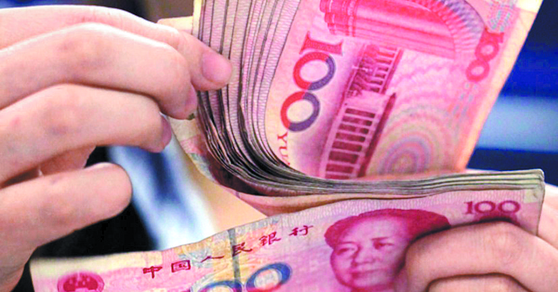 YOU SANG-CHUL
The author is the head of the China Institute at the JoongAng Ilbo.

Is the engine of the Chinese economy pushing global economic growth starting to cool down? The world seemed to be surprised when China’s National Bureau of Statistics released the third quarter growth rate of 4.9 percent. It was expected to be over at least 5 percent, but the prediction was shattered. What happened to the Chinese economy? There are four major reasons. The first is the remaining impact of Covid-19. Sporadic outbreaks across China prevent complete economic recovery.

Second, the Chinese government’s harsh regulations are mentioned. Starting with Jack Ma, founder of Alibaba, last year, the private education industry and game industry were attacked this year. IT giants that attempted to list their companies in stock exchanges in the U.S. without trying to please the government were investigated for security issues. The entertainment industry was also beaten. The background is the “common prosperity” slogan advocated by Chinese President Xi Jinping. No one would oppose the goal of being prosperous together. But Chinese people interpret it as a shift to the left. The Chinese government’s action to “regulate disorderly expansion of capital” is seriously flawed as it discourages private businessmen’s innovative will.

The third reason for the slump is a crackdown on real estate developers along with the authorities’ harsh regulations. The most notable case is Evergrande Group’s liquidity crunch. It is right to control the overheated real estate market, but the industry impacts the economy as it has a long industrial chain and is directly related to local government’s finance. As it is related to jobs and the lives of tens of millions of households, it needs to be approached gradually. But some think the government is shaking the reins of real estate too roughly.

The last reason is the electricity shortage in China that started in September. Nearly 20 of China’s 31 provinces, cities and autonomous regions cannot keep factories running due to the power shortage.

There are complex factors for the power crisis, but there are two major reasons. One is that as electricity bills are capped, thermal power plants lose more if they burn more coal for electricity. The other factor is Xi’s promise for carbon peak and carbon neutrality goals. Xi has promised to show a blue sky for the Olympics in Beijing in February.

The easiest way to achieve this goal is to reduce factory operation hours by restricting electricity. It is natural that the economy worsens. It is expected that the fourth quarter will also be tough. But I am worried that this is not just about China. Korea’s situation doesn’t seem much different.