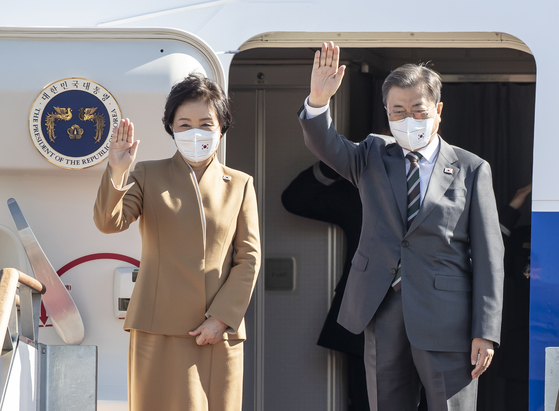 President Moon Jae-in, right, and first lady Kim Jung-sook leave for Italy on Thursday to attend the G20 summit in Rome, the first leg of his visits to Italy, Britain and Hungary. [NEWS1]

A summit between President Moon Jae-in and U.S. President Joe Biden may take place on the sidelines of the G20 summit in Rome, according to the Foreign Ministry.

“Discussions are ongoing between the two governments on if a meeting can be held on the sidelines of the G20 summit,” a Foreign Ministry official told reporters Thursday.

Moon left for Italy to attend the G20 summit on Thursday, kickstarting visits to Italy, Britain and Hungary through Nov. 5 that will focus on multilateral diplomacy, climate change issues and North Korea.

One of his meetings particularly eyed by Korea watchers is the one with Pope Francis, scheduled for Friday.

When the two met in 2018, Moon extended an invitation from North Korean leader Kim Jong-un for the pontiff to visit Pyongyang. Francis said he was willing to make such a visit.

North Korea and the Vatican do not have diplomatic relations.

Talk of such a visit fizzled with the collapse of the second North-U.S. summit in Hanoi, Vietnam, in February 2019.

The pope has been a staunch supporter of peace on the peninsula and has continued to relay his hopes to visit Pyongyang someday.

The Unification Ministry in a press briefing on Monday said the government will support the pope’s visit, should it happen.

“I believe that this visit to the Holy See will lead to a broader dialogue on the peace process on the Korean Peninsula,” said Lee Jong-joo, spokesperson of the ministry on Monday.

Unification Minister Lee In-young will be accompanying Moon to the Vatican.

Moon will attend the G20 summit in Rome from Saturday to Sunday. The president will discuss climate change, the international economy and sustainable development with his counterparts at the summit, according to his office.

Moon is scheduled to announce at the conference Korea’s new 2030 nationally determined contributions (NDC) targets to reduce greenhouse gas emissions by 40 percent from the country’s peak in 2018.

“The G20 and COP26 will go down in history as important meetings, they will gather the will of people around the world for an equal distribution of the coronavirus vaccine […] and an inclusive recovery,” Moon said during a meeting with ambassadors and diplomats from Italy, Britain and Hungary before his departure from Seoul Thursday, according to his office.

In the third and final leg of his Europe trip, Moon will make a three-day visit to Hungary from Nov. 2.

This will be the first visit by a Korean president to Hungary in 20 years since former President Kim Dae-jung's in 2001.

Last year, Hungary erected a monument to commemorate the Korean tourists killed in the deadly ferry sinking in Budapest in 2019, and Moon will visit the site and pay tribute to the victims on Nov. 2, said the Blue House.

On May 29, 2019, the Hableany ferry capsized on the Danube River near Margaret Bridge after being hit by a larger vessel, killing 25 Korean tourists and two Hungarian crew members. One Korean is still missing.

“During the cruise ship accident, the Hungarian government made special efforts to help Korea and built a memorial space,” Moon said in his conversation with the ambassadors on Thursday. “This trip will help us express our appreciation to Hungary and create a driving force for the development of bilateral relations.”

On Nov. 4, Moon will meet with the leaders of the Visegrad Group (V4), the Czech Republic, Hungary, Poland and Slovakia, in Budapest.

The Visegrad Group, a political alliance of four Central European states, is the second-largest trading partner and largest export market in the European Union for Korea. The visit is expected to serve as an opportunity to expand cooperation in industries such as electric vehicles (EVs) and batteries, the Blue House said.

The president wraps up his European tour on Nov. 5.