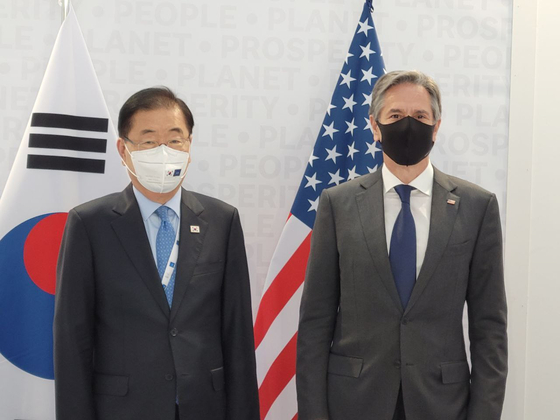 Foreign Minister Chung Eui-yong, left, and U.S. Secretary of State Antony Blinken meet on the sidelines of the G-20 summit in Rome on Sunday. [MINISTRY OF FOREIGN AFFAIRS]


Foreign Minister Chung Eui-yong pushed for a formal declaration to end the 1950-53 Korean War during his meeting with U.S. Secretary of State Antony Blinken on the sidelines of the G-20 Summit in Rome on Sunday.

This push to end the war was, however, left out in the American press release following the meeting, which highlighted the “ironclad U.S.-ROK alliance” and their “commitment to the complete denuclearization of the Korean Peninsula.”

The differing sense of urgency between Washington and Seoul on the end-of-war declaration was not surprising given there have been noted differences in their stances on the agenda.

Seoul has been pushing for a formal declaration to end the Korean War as a means of encouraging Pyongyang to return to dialogue, an issue that has been discussed in a series of talks between the South Korean and U.S. officials, including those of the two countries' nuclear envoys in the past few weeks.

U.S. National Security Adviser Jake Sullivan in a press briefing on Tuesday, however, admitted that Korea and the United States “may have somewhat different perspectives on the precise sequence or timing or conditions for different steps” when it comes to Seoul's proposal for an end-of-war declaration as a catalyst to restart nuclear talks.

Sequencing, or who takes the first step and the order of events, is at the core of the denuclearization negotiations, an issue that has frequently come up since diplomatic engagement with Pyongyang kicked off in 2018 with a series of inter-Korean and North-U.S. summit talks.

The timing for making the end-of-war declaration is another point of debate, considering that the Moon Jae-in administration will come to the end of its five-year term next May.

The third issue Sullivan mentioned, conditions, involves what will be given in return for ending the war, something Pyongyang and Washington may not see eye-to-eye on.

The Joe Biden administration has repeatedly offered dialogue “without conditions” to North Korea, who, instead, has repeatedly mentioned a number of conditions, including ending the Washington-Seoul joint military exercises.

The regular joint military exercises have been scaled down both due to the pandemic and to give way to the diplomatic efforts to engage the North in dialogue. One of the large-scale air exercises, the Vigilant Ace, has been suspended since 2018, and only limited flight exercises were held.

A joint annual air exercise between Washington and Seoul held on Monday was also scaled down, according to Yonhap.

Pyongyang, along with protesting the Seoul-Washington joint drills, has called for the removal of U.S. troops on the Korean Peninsula, and some experts have been concerned about the legal ramifications of an end-of-war declaration, and whether it would undermine the grounds for the stationing of American forces here.

end of war declaration korea us