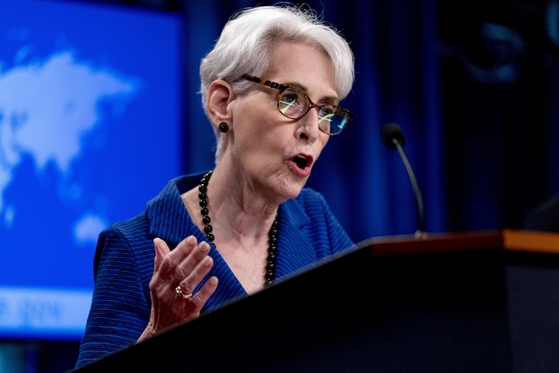 Deputy Secretary of State Wendy Sherman in this file photo taken at the State Department in Washington DC on Aug. 18. [AP PHOTO/ANDREW HARNIK]

American officials have started calling the end-of-war declaration, a signature diplomatic goal of the Moon Jae-in administration, an end-of-war statement, which may not be good news for Seoul.

“'Declaration' or 'statement,' what really matters is what is stated inside,” a former diplomat told the JoongAng Ilbo on Monday. "But still, calling it a statement instead of a declaration does appear to lower its official standing."

Semantics are always important in diplomacy, and this choice of words seems to signify a reluctance by the U.S. to sign on to the idea, or its intention to downplay it.

U.S. Deputy Secretary of State Wendy Sherman was one of the first to refer to the declaration as a statement on Nov. 17.

“On the issue around [the] end-of-war statement, I’m very satisfied, the United States is very satisfied with the consultations we are having both with the Republic of Korea and with Japan, and with other allies and partners, on the best way forward to ensure the complete denuclearization of the Korean Peninsula,” Sherman told the press in Washington D.C.

When asked about Sherman's use of the word, an official from the State Department told the JoongAng Ilbo, “I don’t have anything to add to the Deputy’s comments.”

“Our policy has not changed,” said the official. “The United States remains committed to achieving lasting peace on the Korean Peninsula through dialogue and diplomacy with the DPRK.”

Sherman was not the only American official to use the term recently, according to a source.

“The American officials I have met recently have all used the term statement when speaking about the end-of-war declaration,” the source told the JoongAng Ilbo.

The switching of terms may be intentional, according to James Kim, a researcher at the Asan Institute for Policy Studies.

“By calling it a statement, it may be trying to make sure that the end-of-war statement does not affect the armistice agreement system such as the UN Command,” said Kim.

The 1950-53 Korean War ended with an armistice, not a peace treaty.

The 1953 Mutual Defense Treaty signed between Washington and Seoul two months after the signing of the armistice provided the legal grounds for the U.S. Forces Korea (USFK) and the United Nations Command to be stationed in the country since the war.

The Moon government has been pushing for an official declaration to end the war in recent meetings with the Joe Biden administration, and in recent weeks the two sides have been working on the wording of such a declaration.

Neither have commented officially on what a formal end to the war would do to the status of U.S. troops in Korea and Seoul-Washington joint military exercises.

end of war declaration or statement