Daily Covid case count to be downplayed, even if it rises

Daily Covid case count to be downplayed, even if it rises 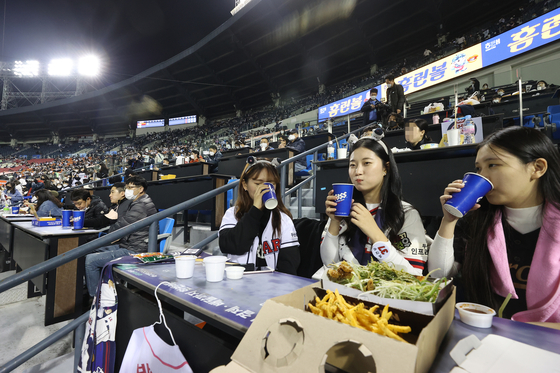 
As Korea starts getting back to normal, the government began a new way of releasing Covid-19 statistics by focusing on severe cases and deaths, and downplaying daily infection counts.

Starting Monday, the country adopted a new set of “With Corona" policies, which are akin to “Living with Covid” measures elsewhere. Under the new scheme, the country is to focus more on managing critically ill patients rather than trying to stop infections and gradually ease social distancing measures. It will treat Covid-19 like other infectious respiratory diseases such as seasonal influenza.

But that doesn't mean new infections are falling or even plateauing — in fact, they are expected to rise further in the wake of the Halloween weekend, on which thousands of people celebrated the Western holiday in streets and bars.

On Monday, the Korea Disease Control and Prevention Agency (KDCA) said that nine virus deaths were reported in the country, raising the death toll to 2,858. The fatality rate stood at 0.78 percent.

The number of critically ill patients was up by 11 from the previous day to 343.

“The single-day average of severe cases was 333 from the past week from Oct. 24 to 30, down slightly from the week before [at 343],” said Park Hyang, head of the quarantine team of the Central Disaster Management Headquarters, during a briefing on Monday.

“Considering the association between critically ill patients and ICU usage, we expect there won’t be major problems in operating ICUs at a level of less than 500 people,” Park said.

Starting next week, the KDCA is to hold a weekly risk assessment briefing every Tuesday.

The agency will make its assessment based on three indicators about the virus, occupancy of hospital beds and the vaccination campaign.

Also on Tuesdays, the KDCA will explain the effects of vaccines, breakthrough infections, the overseas virus situation and virus variants.

Briefings on Thursday will give updates on the vaccination campaign and vaccine side effects. On Fridays, briefings will concentrate on the status of research and development such as of Covid-19 pills.

And yet health authorities admitted Monday that daily Covid-19 cases could rise in the future — a lot. 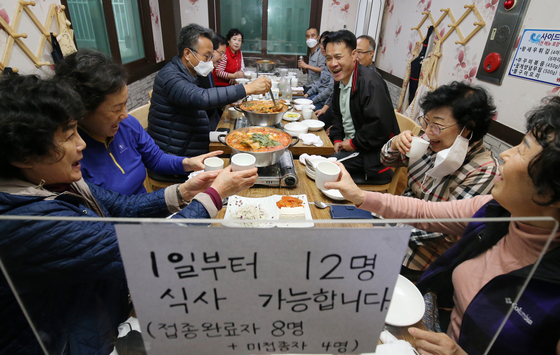 A group of 12 people have meal together at a restaurant in Daejeon on Monday, the first day of the introduction of the phased social distancing "With Corona" scheme which allows up to 12 people to gather socially in non-metropolitan areas. [NEWS1]


In a radio interview on Monday, Son Young-rae, senior epidemiological strategist at the Central Disaster Management Headquarters, said virus patients are expected to “double or triple” following Korea’s transition into the “With Corona” policies.

“However, the nature of the patient is important,” Son added. “The situation will vary depending on whether the unvaccinated, the elderly, and high-risk facilities can be defended from infections."

He said the domestic medical system will be able to accommodate up to 5,000 daily cases.

In line with the “With Corona” scheme, distancing restrictions in the military were eased on Monday, allowing soldiers to go out on weekdays and letting unvaccinated people visit their relatives and acquaintances in service.

In February 2019, military authorities have allowed weekday outings for four hours after work twice a month, but they were stopped last year due to the pandemic.

Visits to soldiers are only allowed to the fully vaccinated or people who tested negative for Covid within 48 hours.