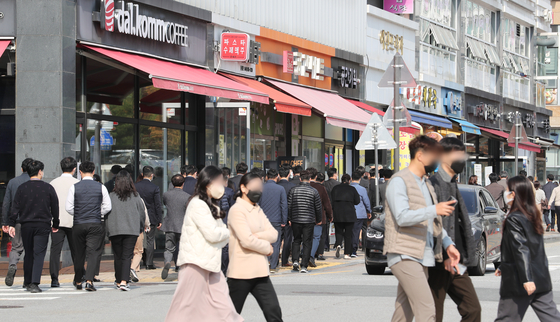 Shops near the government complex in Sejong crowded with people coming out for lunch on Nov.1, the first day the new eased social distancing was enacted. Small shop owners suffered the most from Covid-19. [YONHAP]

Those in their 40s and 50s were hit especially hard.

According to Statistics Korea on Thursday, as of August, there were 6.61 million self-employed business owners in the country. The figure also includes family members, such as spouse or siblings, that work for the business without pay.

When compared the year-ago period, the country had 29,000 fewer self-employed businesses. That’s a 0.4 percent drop.

As such, people working in self-employed shops have 23.9 percent of the country’s 27.6 million jobs. A year earlier, that ratio was 24.5 percent.

The ratio of self-employed is a record low since the data were first compiled in 1982.

The biggest declines were in the 40s and 50s age groups.

The tough job market since the pandemic outbreak is considered to be one of the key factors driving people to start their own businesses.

In a survey of self-employed business owners with businesses open for less than a year, 22.2 percent said they decided to open their own business as it has became difficult to find jobs. That’s up from 19.6 percent a year earlier.

Those that started their own businesses to become their own boss dropped to 69.8 percent from 71.4 percent.

Self-employed business owners have been facing intense pressure under the current administration.

The administration’s push for income-led growth led to a rise in the minimum wage, which added to the labor costs of small business owners.

Covid-19 has only added to their problems.

The statistics agency has also found that despite the government’s favorable job report in recent months, those that have given up searching for jobs continued to remain above 2.4 million.

As these people have given up on the job search, they are not included in the unemployment rate.