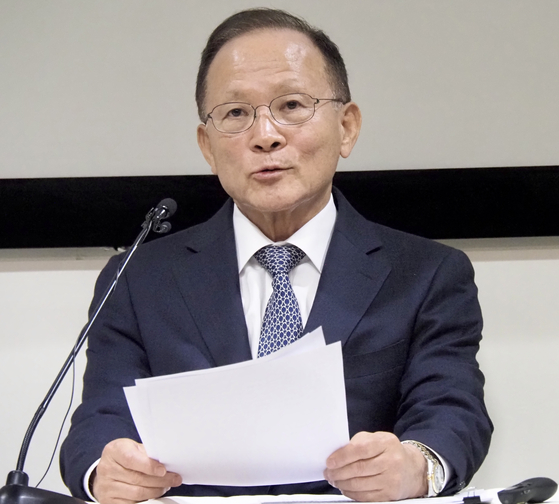 Korean Ambassador to the United States Lee Soo-hyuck speaks with a group of reporters in Washington, D.C. on Tuesday. [JOINT PRESS CORPS]


Seoul and Washington are negotiating over the ideas and wording of a written declaration to formally end the 1950-53 Korean War, said Korean Ambassador to the United States Lee Soo-hyuck in speaking with a group of Korean reporters in Washington, D.C. on Tuesday.

“Korea and the United States are closely negotiating the issue of the end of the war,” Lee said. “We are actively and creatively working together on the matter to the extent of exchanging opinions even on the text used in the end-of-war declaration.”

Seoul has been pushing for a formal declaration to end the Korean War as a means of encouraging Pyongyang to return to dialogue, an issue that has been discussed in a series of talks between the South Korean and U.S. officials.

North Korea, on the other hand, has demanded that the sanctions on the regime be lifted as a condition for the talks on formally declaring the end of the war.

The Joe Biden administration has put forward a North Korea policy since April that does not seek so-called grand bargains with Pyongyang, but a more practical approach that will not grant North’s wishes just to have talks. In June, it extended its sanctions on the North for another year.

U.S. National Security Adviser Jake Sullivan in a press briefing earlier this month admitted that Korea and the United States may see things differently when it comes to Seoul's proposal for an end-of-war declaration as a catalyst to restart nuclear talks.

Ambassador Lee in the press conference Tuesday emphasized that the cooperation between Washington and Seoul had “become stronger” since the onset of the Biden administration, and that the administration has “largely re-assessed Korea’s status.”