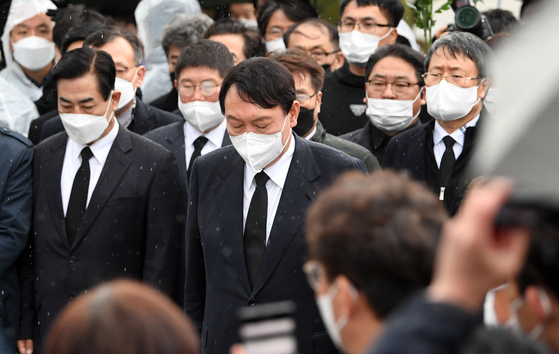 People Power Party presidential candidate Yoon Seok-youl bows his head in respect outside the May 18 National Cemetery in Gwangju on Wednesday afternoon. [NEWS1]


Physical clashes occurred at the May 18 National Cemetery ahead of a Wednesday visit to Gwangju by main opposition People Power Party (PPP) presidential candidate Yoon Seok-youl.

The former prosecutor general visited the cemetery to pay respects to slain democracy protesters and apologize for recent remarks that cast former President Chun Doo Hwan in a positive light.

Chun, who took effective control of the government in a coup d'état in December 1979, ordered the military to suppress pro-democracy protests that broke out in May 1980 in the southwestern city of Gwangju. The brutal crackdown resulted in the deaths of at least 165 people, according to government estimates.

Standing outside the cemetery, Yoon offered a direct apology for the comments, where he characterized Chun as a competent state administrator thanks to his military background.

"I bow my head in apology for hurting people with my comments," the PPP's presidential candidate said before lowering his head in silence for three seconds.

Yoon landed himself in hot water after making remarks at an Oct. 20 PPP council meeting in Busan, where he said Chun "did well in politics" except for the "military coups" and what he did on May 18.

"There are a lot of people who say that in Honam, too," Yoon had said, referring to southwestern region of Korea that includes Gwangju and the South and North Jeolla provinces.

Although Yoon's visit to the Gwangju cemetery was intended to make amends for the comments, his visit did not seem to placate the May Mothers Association, a group representing the mothers of the protesters killed during the 1980 protests, the Korean Progressive University Student Association or activists from other local and national civic groups, which attempted to block the candidate's visit to the cemetery.

Signs of resistance to Yoon's Wednesday visit began the night before, when student activists arrived at the entryway to the cemetery, setting up tents and loudspeakers to denounce the candidate's visit.

The activists intended to enter the cemetery just before Yoon set foot in the complex to monopolize spots in front of the memorial altar and graves and to prevent him from "putting on a political show," as they characterized his visit.

The protests then turned violent on Wednesday, after members of the May Mothers Association demanded police remove safety fences installed at the Democracy Gate, the entrance to the cemetery, ahead of Yoon's visit to the cemetery.

An unnamed representative from the May Mothers Association called the police security measures "ugly fences built atop the place where our children and husbands are laid to rest."

When police did not dismantle the fences, members of the May Mothers Association began to remove the fences themselves, turning the site into a push-and-pull physical clash between police and activists.

Although there were no injuries, the tussles lasted approximately 15 minutes, resulting in some activists' coats being torn and civic group members being thrown to the ground in the chaos.

Local Gwangju activist organizations also said they planned to present the presidential candidate with rotten apples to deride the apologetic intent of his visit.

The Korean word for apple, sagwa, is a homonym for the word apology.

Although Yoon apologized for the comments at the time, saying he only meant to highlight his intention to appoint professionals if he were to be elected president, the apology backfired when his campaign posted a photo of his dog with an apple on Instagram, leading to intense criticism that he likened his critics to a dog.

Despite the resistance from activists, Yoon paid his respects at the cemetery, entering a little past 4:30 p.m. on Wednesday. However, due to the presence of a large number of protesters inside the cemetery, the presidential candidate was unable to stand close to the memorial tower.

His visit is the second to the cemetery in four months, following a visit in July, before he officially joined the main opposition party and launched his presidential bid.

"All of us today are sons and daughters of Gwangju in May," he added. "If I become president, I will make Gwangju and Honam a dynamic region full of hope." 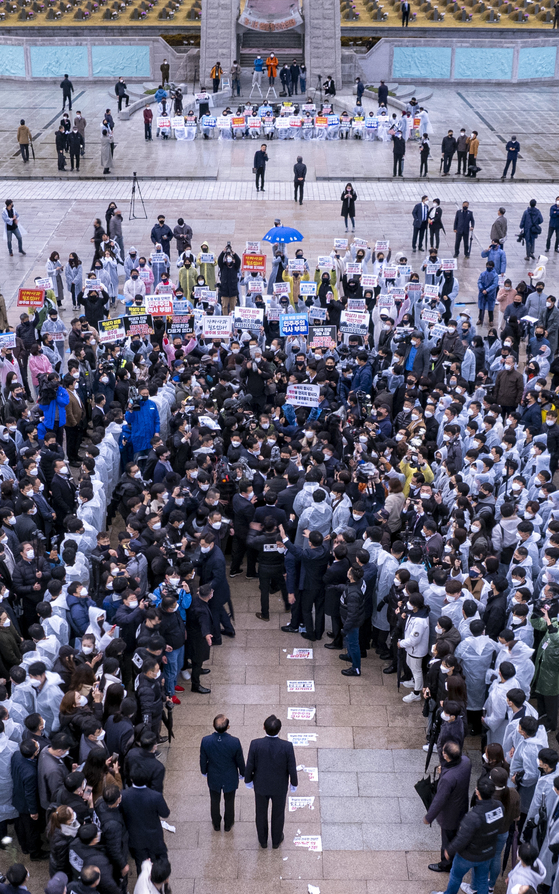 Yoon stands at a distance from the memorial altar inside the cemetery, his way blocked by protesters and members of the May Mothers Association. [NEWS1]