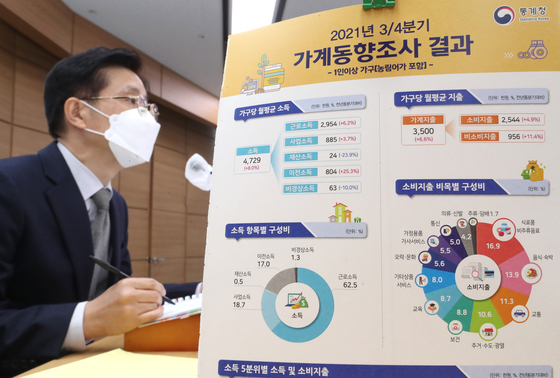 Household incomes grew sharply in the third quarter, largely thanks to government giveaways.

Between July and September, the average household income was 4.73 million won ($4,000), according to Statistics Korea on Thursday, 8 percent more than a year earlier.

“Overall incomes grew in the third quarter largely thanks to improvement in jobs, the government emergency relief grants and the Chuseok holidays [which boosted spending],” said Chung Dong-myung, a Statistics Korea official.

Unlike grants that were given to households in May 2020, all eligible individuals were given 250,000 won in the latest round.

On average, transfer incomes, which consist of government subsidies including the relief grant and allowances from relatives or other sources, increased 25.3 percent compared to a year earlier.

People in the lowest 20 percent income brackets benefited the most.

The average monthly income for that group grew 21.5 percent in the third quarter to 1.14 million won.

The average income for the top 20 percent was 10 million won, up 5.7 percent,

“The proportion of people aged 60 or older is relatively high in the lower 20 percent income bracket,” Chung said. “Thanks to public jobs provided by the government, the number of jobs for people that are 60 or older increased.”

Household spending expanded 6.6 percent in the third quarter to an average of 3.5 million won.

The statistics agency cited improved consumer sentiment for the increase in spending.

“Consumer spending saw an increase in all categories including face-to-face businesses such as restaurants, hotels, entertainment and culture,” Chung said. “It seems the government emergency relief grants and the Chuseok holidays had an influence.”

Spending in hotels increased 22.7 percent while spending on sports and entertainment increased 6.5 percent.

However, rising consumer prices also added to the increase in household spending.

Due to rising crude prices, transportation spending on average increased 16.4 percent compared to a year ago.

Consumer prices have been rising more than 2 percent since April. Last month, they grew at the fastest pace in nearly a decade, 3.2 percent.

Crude prices have raised prices of other manufactured goods.