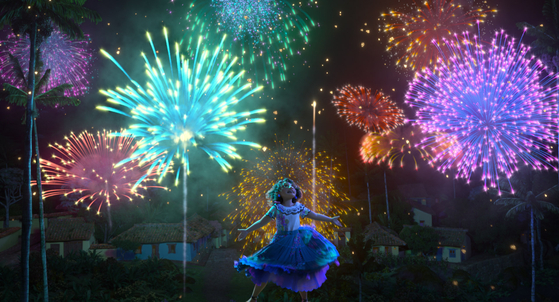 In the upcoming Disney animated film "Encanto," slated to premiere in local theaters on Nov. 24, Mirabel Madrigal struggles to fit into her family where everyone has been blessed with magical powers - except for her. Determined to prove she belongs within this extraordinary family, Mirabel starts to separately question each of her family members to protect the magic surrounding them. [WALT DISNEY COMPANY KOREA]


Disney protagonists have always ventured into the unknown — whether it’s to save, or find their loved ones, to discover their self-worth, or even to just have a fun adventure. In Walt Disney Animation Studios' 60th feature film “Encanto," even before the setting was chosen, before even a single character was imagined, the filmmakers had already decided on the theme of the movie: family.


However, where exactly in Latin America the movie would be set took some time to decide. Along with award-winning songwriter, actor and director Lin-Manuel Miranda, who wrote and produced eight original songs for “Encanto,” the crew traveled to Colombia in 2018 for their research which was supported by the Colombian Cultural Trust. It was there that they were captivated by the multi-generational, diverse family dynamics they found within the vibrant towns and cities such as Cartagena, Bogotá, Barichara and San Basilio de Palenque.

The three creators began to construct the tale of an extraordinary family, the Madrigals, who lived in a town called “Encanto” situated in the mountainous regions of Colombia.

Every member of the family is blessed with a unique, magical gift when they turn five years old — all except Mirabel. But when Mirabel realizes that the magic surrounding Encanto is in danger, she, the only ordinary member of her exceptional family, might be their last hope.

During an online interview with the Korea JoongAng Daily on Wednesday, two of the creators of “Encanto,” Howard and Bush, discussed in detail the production process of the upcoming film. The following are edited excerpts. 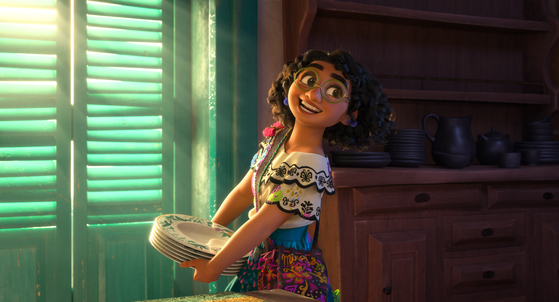 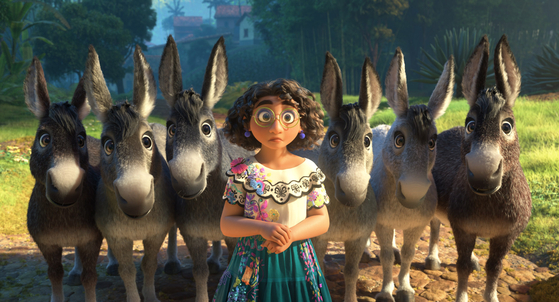 
Q. Mirabel is the first Disney heroine to wear glasses. How did you come up with this idea and why did you think glasses would suit her?


A. Bush: Glasses are really cool and it's about time that we had a Disney heroine wear glasses. For our story, it's really about how you see your family and how your family sees you so the notion of being able to see was very important to us. The notion that she's wearing glasses was very much tied to the mathematics we wanted to be part of who she was as a character. Her name Mirabel, in Spanish “mira” means to see, to look and so we tied [that in] thematically as well.


I heard that you actually went to Colombia with Lin for your research. In the sense of cultural context, what did you find to be distinct about the country? Why did you choose it as the setting for the movie?

Howard: We took that research [trip] to Colombia three and a half years ago. This was after many, many months of trying to figure out where in Latin America we wanted to set the movie. Lin was our creative partner from the beginning on the show. [He] really wanted to do a definitive Latin American musical but none of us really knew the exact place to go until Carlos Vives, [a friend] of ours who happened to be Colombian started telling us more about the country and we really learned that Colombia was at an amazing crossroads of everything in Latin America from culture to dance to traditions to ethnicity. We wanted a very diverse family and Colombian families are beautifully mixed and thinking about this family of dozens of people all within this house, who all had to be different and unique and distinct, we thought was an amazing place to dive into. The research trip really proved to us it was so rich, beautiful and wonderful. The families that we stayed with and met with were so welcoming and warm and cared so deeply about each other. We knew we had chosen the right place. Coming back from that trip we were even more inspired to try to represent as much of Colombia in the film as possible though you can make 100 films about Colombia and not even scratch the surface so I really hope this is the first of many. 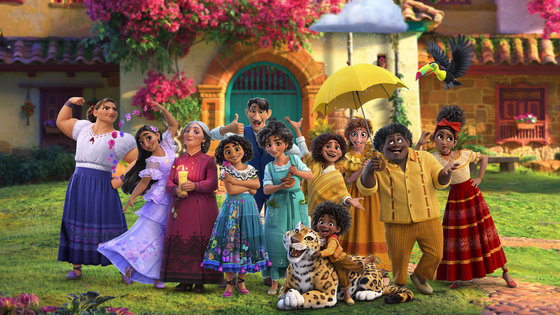 Mirabel, in the middle, and rest of her family live in an enchanted house in a vibrant town in Colombia. [WALT DISNEY COMPANY KOREA]

One of the lyrics that Mirabel sings is about making her family proud, and her other siblings also sing about living up to their family’s expectations. Did you write these scenes to be specifically attributed to the narrative itself, or was that a family dynamic that you found through your research?

Bush: I mean, definitely yes in Colombia, but we found that to be universal so early on when we first started the project five years ago. We got a group together inside the studio called "La Familia group" — this was anybody [who was a] Latin member of our studio who would come to talk to us about families, and one of the things that kept on coming up over and over was this notion of the expectations that you have in a family. That is something we found certainly in Latin America but also [in] many, many cultures and people around the world [...] And we found that to be a very universal thing — honestly pretty much every family has some of these archetypes and so when we got to this notion that Mirabel would have these sisters. [Luisa] is really strong, [Isabela] is perfect and amazing, but when she [Mirabel] actually talks to them, that strength comes with responsibility and burden, and that perfection comes with eliminating the possibility that she [Isabela] can be anything other than absolutely perfect. So part of it was [that] we wanted Mirabel to start to empathize with these members of her family that she'd only seen in one way as part of the journey she goes on.


The voice actor behind Mirabel is Stephanie Beatriz, who is most familiar to most as Detective Rosa Diaz from American television series “Brooklyn Nine-Nine.” How did you decide to cast Beatriz as Mirabel and what qualities did you see in her as a person that were similar to the character?

Howard: She's incredible, I already knew her from “Brooklyn Nine Nine.” I've only heard her speak as herself, as an actress, so I thought her voice [would sound like] Diaz. I actually had to check the call sheet to say “is this the same Stephanie Beatriz?” and it was! Stephanie’s personality was very much like Mirabel in the movie. Even her audition song was “You’re Welcome” from “Moana” and it was so catchy and so funny that one of our animators actually animated an early scene of Mirabel to it. I think we knew she came in for a different role but as soon she came around we looked at each other [via] Zoom and thought, “I think this might be her.” She was so different and she just nails it in the movie. She's emotional, she's a great actress, great singer amazing performer and so funny which is really, really hard to find. It's hard to find a lead who can be interesting, flawed and just that vulnerable. She was just 100 percent amazing.


It was another unexpected twist for Disney to turn the trope of “the chosen one” —characters who are special from the beginning — around and shine the limelight on the “not chosen one.” How did you come up with this twist?

Bush: Unfortunately, I think that I deal with self-worth issues a lot in my own life. I'm surrounded by some pretty amazing people and I think a lot of us are and I think it's really easy to look around and wonder whether you fit in, whether you measure up, whether you're as gifted as those around you. I think that's a pretty common thing so I think the idea that Mirabel would be like us, the ordinary one, was something we really wanted to do. I think on the one hand, I had a lot of fun with the character Moana as the chosen one [who's] preordained to be the one to save her family. So it's very different and really fun to have someone who's been kind of discounted, and someone who's discounted herself, to be the one who has to step up and start to discover these things about her family that no one ever saw. I think because she's somewhat of an outsider that's what allows her to have the perspective that she so needs to be the one to heal her family.