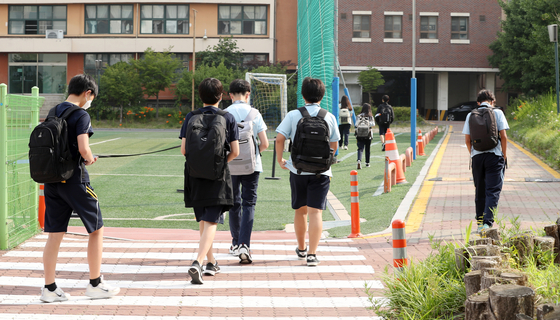 Students of Jangpyung Middle School in Dongdaemun District, eastern Seoul, are on their way to class in this file photo dated June 14. [JOINT PRESS CORPS]


Starting Monday, all elementary, middle and high schools across the country will hold classes in person, said the Education Ministry on Friday.

Students started returning to classrooms outside of the greater Seoul area for the fall semester from early September, but the greater Seoul area, consisting of Seoul, Gyeonggi and Incheon, was ruled out due to the outbreaks from the fourth wave of the country's pandemic being largely centered in the region.

After over 70 percent of the population were vaccinated, the country started implementing relaxed social distancing measures from Nov. 1, a scheme it named “With Corona,” akin to “Living with Covid” measures elsewhere, but schools in the greater Seoul region were asked to only hold limited in-person classes and mostly continue with remote classes until after the college entrance exam, or College Scholastic Ability Test (CSAT), which took place on Thursday.

“Starting Monday, about 97 percent of all schools in the greater Seoul region will be holding classes in person,” the Education Ministry said in a statement on Friday.

The ministry also released guidelines on the course of action for students and faculty when their family members test positive or go into quarantine after coming into contact with an infected person.

If a member of a student’s family tests positive, the student needs to get a PCR test immediately and wait to go back to school until they receive their negative test results. If a student’s family member goes into quarantine after coming into contact with an infected person, the student can still come to school if he or she is vaccinated. If the student is not vaccinated, they must present a negative PCR test result before attending classes in person, according to the ministry.

The complete reopening of schools comes as Korea undergoes another spike in daily cases.

Korea on Thursday added 3,034 new cases, of which 23 were imported — the fourth day in a row with over 3,000 new cases, according to Korea Disease Control and Prevention Agency (KDCA).

Of the Covid-19 patients in Korea, 506 were in critical condition, according to the KDCA. Twenty-eight people died Thursday, bringing the total death toll to 3,215, at a 0.79 percent death rate.

Health authorities said the “With Corona” scheme will continue for the time being.

“We are seeing daily cases in the 3,000s recently, and part of the reason [for the spike in cases] is due to increased movement of people from the relaxation of distancing measures,” said Lee Gi-il, a senior official of the Ministry of Health and Welfare in a press briefing on Friday. “We don’t think the number of daily cases will drop from here. In other words, we expect the number to continue to rise. But we will be doing what we can to ensure that we have enough sickbeds at hospitals.”

According to the Health Ministry, 63.6 percent of intensive care unit beds across the country were occupied as of Friday. When counting only those in the greater Seoul area, 78.2 percent were occupied.

Prime Minister Kim Boo-kyum and heads of 22 hospitals in the greater Seoul area in a meeting on Friday agreed to find ways to add at least 1,000 more sickbeds across the region to treat Covid-19 patients.

The Health Ministry had said before that the country’s hospitals can handle up to 5,000 daily cases.

all schools reopen korea with covid