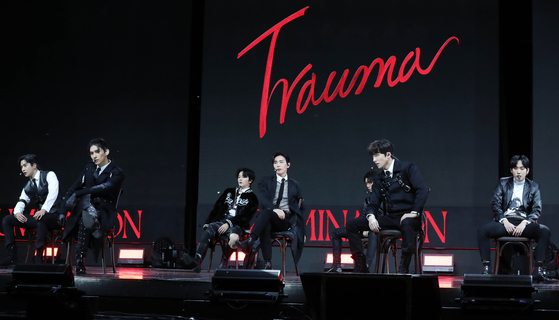 Boy band SF9 performs “Trauma,” the lead track for its new EP “Rumination,” on Monday at Yes24 Live Hall in Gwangjin District, eastern Seoul. The EP dropped the same day at 6 p.m. and consists of 7 songs. All nine members took part in writing or composing at least one song on the EP. “Trauma” is a retro funk and soul track with a strong bass sound. Its lyrics are about overcoming one’s traumas and going into a “new dimension.” “Rumination” is the prequel to the “9lory” (pronounced “glory”) universe, where the nine members are described as “scattered fragments” and must assemble like puzzle pieces to cure each other and become one whole. “Like how a prequel makes a movie more interesting, we wanted to show the parts before the ‘9lory’ series, when the members still have their own traumas,” member Youngbin told the press. [ILGAN SPORTS]