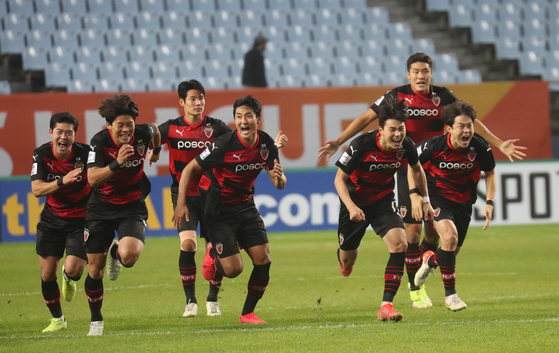 The Pohang Steelers celebrate after beating Ulsan Hyundai in a penalty shootout in the semifinal of the AFC Champions League at Jeonju World Cup Stadium in Jeonju, North Jeolla on Oct. 20. [YONHAP]

If the Steelers win the AFC Champions League title, it will be their first in 12 years. Pohang haven't reached an AFC Champions league final since 2009, the only time they have won the tournament. They also won the predecessor tournament in 1997 and 1998.

A Steelers victory would also mean K League clubs had taken the top continental title for two years in a row, after Ulsan Hyundai won it last year.

Three Korean clubs — Ulsan, Jeonbuk Hyundai Motors and Pohang — reached the quarterfinals of this year's tournament, with the K League's top two clubs, Ulsan and Jeonbuk, facing each other. The last time the two clubs faced off in the Champions League was in 2006, when Jeonbuk emerged victorious on aggregate. But this time, it was Ulsan who turned the tables on Jeonbuk.

In the other quarterfinals match, Pohang took on Japanese side Nagoya Grampus to pull off a 3-0 victory. Despite having twice failed to beat Grampus during the group stage of the tournament — losing the first game 3-0 and drawing the second 1-1 — Pohang put on a dominant performance against Nagoya to win the all-important match.

While Saudi club Al Hilal beat Al-Nassr on the other side of the semifinals bracket, the Steelers took on Ulsan who, at the time, topped the K League standings and were looking at a historic treble: Reaching the quarterfinals in the AFC Champions League, the semifinals in the FA Cup and leading the K League without a serious contender. Not only were Ulsan the reigning champions of the AFC Champions League, but also a higher-ranked team in the K League 1 than the Steelers, as Ulsan are tied for first as of press time while the Steelers are in seventh place.

Pohang trailed behind Ulsan 1-0 for the most of that semifinal match, but just when it looked like Ulsan had the game locked up, Pohang's Alex Grant sent a last-gasp header off the post into the net in the 90th minute to tie the game at 1-1. With neither club able to add any more, the two headed to a shootout which Pohang won 5-4, earning a ticket to the AFC Champions League final.

This year’s final between Pohang and Al Hilal is set to be another historic fixture, as it pits two of the winningest teams in pan-Asian football against each other, with Al Hilal already having won the Champions League three times as did Pohang. The two sides have never faced each other in the Champions League before, although Pohang have faced Saudi opposition in the final, beating Al Ittihad in 2009.

The big showdown will kick off at King Fahd International Stadium in Riyadh, Saudi Arabia at 7 p.m. on Tuesday, or at 1.a.m. Wednesday in Korea.