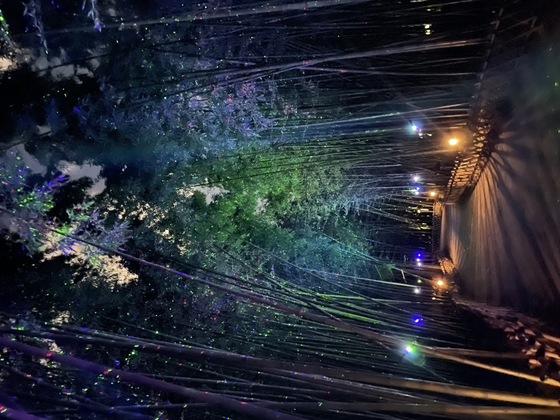 The bamboo forest in Taehwagang National Garden in Ulsan is lit with small LED-lights to create a dreamlike ambience for nighttime visitors. [LEE SUN-MIN]

ULSAN — To many, the city Ulsan neighboring the East Sea, is generally known as an industrial town with many heavy industry or car companies operating their factories there since the 1960s.

Within Ulsan is Ulju County, which is located more inland toward the west where it is easy to spot places that best showcase what nature has to offer in this county. Recently, the Korea Tourism Organization has been making efforts to highlight other interesting aspects of the region. It has been working with local residents to create a variety of activity programs, such as yoga classes or local alcoholic beverage tastings, so that travelers visiting Ulsan can make their trips as memorable as possible.

A bamboo forest, which is part of Taehwagang National Garden, has been transformed for people visiting at night. Usually popular during the day, the green shoots and leaves have been adorned with LED lights. If you're concerned the lights may take away from the beauty of the nature, fear not. The dot-like lights actually work harmoniously with the bamboo and remind visitors of fireflies. When a slight breeze rustles through the shoots, the atmosphere is even more dreamlike.

If you are more adventurous, head to Yeongnam Alps, the mountain range that spreads through Ulsan’s Ulju County, North Gyeongsang’s Gyeongju city and Cheongdo County, South Gyeongsang’s Miryang city and Yangsan city. The nine mountains, with a maximum height of over 1,000 meters (3280.8 feet) collectively, earned the name Yeongnam Alps after hikers in the 1980s thought it was a good fit considering their beauty. The mountains are particularly popular among serious hikers.

Because of the pandemic, many locals, especially the younger generation, have been embracing the outdoors and setting themselves the challenge of climbing all nine mountains. In line with the newfound interest, the city promised to give the first 30,000 hikers who climb all nine mountaintops a silver coin. The city announced on Tuesday that all the coins have been given out.

The mountains are known for their large fields of silver grasses that are particularly attractive to visitors in the fall. When the winds hit the silver grasses they create grandiose waves. Ganwoljae, where you can take a look at both Mount Ganwol and Sinbul, is especially popular for those who want to catch a glimpse of the silver waves. Don't worry if you are not an avid hiker. Ganwoljae is easily accessible by walking on a relatively well-paved road with only a slight incline.

Just like it has become a tradition for those visiting the Alps in Europe to enjoy a cup of Korean instant ramyeon noodles when they reach a summit, the rest center on Ganwoljae also offers such food.

The Daegokcheon Stream Petroglyphs, which is listed as a National Treasure, are a must-see. The engravings of animals can be seen at two different sites, Bangudae Petroglyphs in Daegok-ri and the Petroglyphs in Cheonjeon-ri. Both are on a tentative list to be inscribed as Unesco World Heritages after they were first submitted in 2010.

While the etchings in Cheonjeon-ri are on dry land, those in Daegok-ri are at risk of being submerged in water because of their location close to a stream.

The last time the etchings were submerged was in 2019 due to heavy rains.

While the etchings in Daegok-ri date back to the prehistoric age, the ones in Cheonjeon-ri shows many different creatures not only from the prehistoric ecosystem but also some from much later eras such as the Joseon period (1392-1910). Because the stream makes it difficult to get up close and personal with the etchings in Daegok-ri, a screen has been installed that magnifies the drawings for visitors to get a proper look and guess what sea creatures are on the rock.

Ulsan officials are also making efforts to promote the region's manmade attractions. Local residents are hosting activity programs like yoga classes and local alcoholic beverage tastings. The Korea Tourism Organization has worked with local residents to make these programs as part of its Dure project. Dure means cooperating with one another within a local community, so the state-run organization has been using that word for its project that aims to have locals come up with tour programs. As part of the Dure project, three different programs have been introduced in Ulsan.

Yoga lovers can find their home away from home at Wanastar. Locals who practice yoga regularly gather in the center located inside the mountains close to Daeam Dam and also keep the doors open for visitors looking for a peaceful moment. The center is also open for group bookings for friends or coworkers looking for a workshop to take together. Outdoor classes are also available.

If you are interested in the history of the area, a local collaborative called Emmaus leads a walk along a trail that shows off the spots where Catholics used to hide or gather to pray in tough mountain ranges in Ulju County. The tour also offers food and beverages made by locals.

For children, the Seed is a multi-cultural center that offers food made with local ingredients to give young visitors a chance to expand their palates. They also use craftworks made by local artisans in their classes as a way to provide support to artists in the area.

Boksoondoga, an Ulsan-based traditional style alcoholic drink maker, offers an extensive tasting at its winery. Named after the matriarch of the family that runs the winery, Bok-soon, the recipe was handed down from family member to family member. Boksoondoga is known for its makgeolli, or fermented rice drink, that is carbonated. Also on offer is wine made with red-colored rice and traditional soju. Tasting is free, and a gift shop offers all the beverages so you can take some home.

Trevier, a craft beer maker in the region, offers a more extensive tour of its brewery. Although the pandemic means there are some restrictions, it is still possible to check out the machines that label the cans and the tanks that holds the beer as it ages. There is a restaurant attached to the factory where visitors can fill up after the tour.