Mohwa is a shaman who becomes aware of her limits both in her abilities and her religion. During her struggle she reconnects with her son Wook-Yi. In this scene, Mohwa is performing "gut," or a traditional shaman ritual. [MEDITATION WITH A PENCIL]


“'The Shaman Sorceress’ is the last animated work by our studio to be drawn on paper with pencil.”

This is how the recently released film is introduced on the website of animation studio “Meditation With a Pencil.”

“The Shaman Sorceress,” directed by Ahn Jae-huun, depicts a tragic tale about a family. Mohwa, a mother and shaman, and her son Wook-Yi, who becomes a devoted Christian, clash during the 1920s, in the midst of Japan’s 1910-45 colonial rule of Korea.

Adapted from a short novel written by Kim Dong-li in 1936, Ahn transitioned the story into a musical animation and won the Contrechamp Jury Distinction prize at the Annecy International Animation Film Festival last year. The festival is considered a highly esteemed event for animated films, seen to be equivalent to the Cannes festival for feature films.

The film beautifully portrays the confusion and anger Mohwa feels when her son returns from his travels as a believer of Christianity through musical sequences and vivid of colors. Mohwa’s disoriented state of mind is shown through a swirl of colors and animated backgrounds created with rough brushstrokes. Part of her chagrin lies in the shifting social norm as town people start to doubt her abilities and even the religion itself, and start accepting Christianity just like Wook-Yi. Her deaf daughter Nang-Yi is caught in the middle, joyous for her older brother’s return but afraid of her family’s conflict. 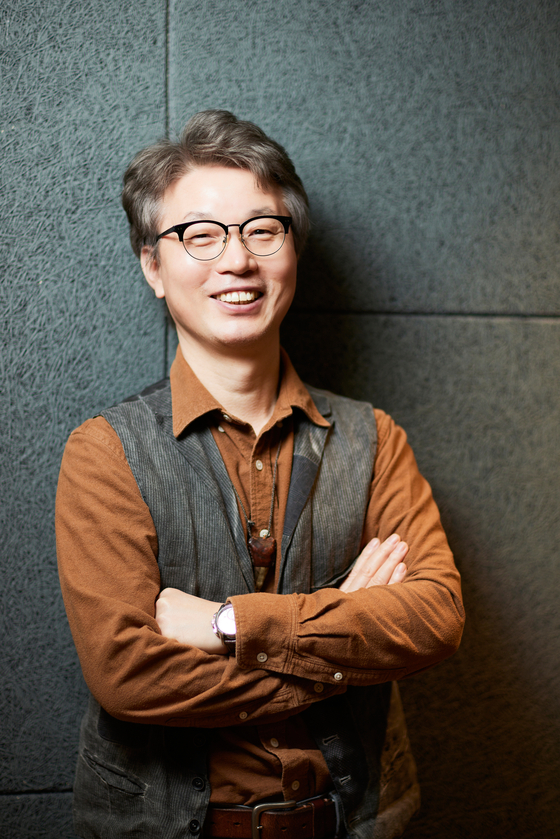 
Ahn, who is an atheist, said that he understood both Mohwa and Wook-Yi.

“It’s a little different though, because Mohwa [at the end] realizes the limits to her religion, but Wook-Yi is still young and extremely devoted to his religion,” Ahn told the Korea JoongAng Daily at his studio in Namsan-dong, central Seoul on Friday. “It becomes easier to understand [them] when you compare religion to love. Sometimes when we fall in love, we become oblivious to everything around us.”

The first scene of the film starts with Mohwa doing gut, a traditional shaman ritual, in a secluded forest wearing a white hanbok (traditional Korean attire). As her movements appear between the long, colorful fabric hung from tree branches, the abundance of sound created through the merge of traditional music and the musical is enough to immediately catch the full attention of the audience.

To accurately incorporate elements of shamanism, Ahn and his crew visited shamans all over the country. The physical appearance of Mohwa is based on shaman Kim Keum-hwa, a holder of country’s Intangible Cultural Heritage No. 82-2. Ahn even took musical actor Sonya, who voices Mohwa, to visit shaman Lee Hae-kyung in Hwacheon County, Gangwon, so that the actor could properly learn about the rituals.

“What was astonishing when the two [Lee and Sonya] met was how quickly Sonya accepted and picked up the details of gut through music,” Ahn said. “Lee, as a shaman, was showing us her profession, but the actor reinterpreted the movements in rhythms — even Lee was surprised by her.”

Top and above: Wook-Yi becomes a devoted Christian during his travels to Seoul and tries to convince his mother and younger sister Nang-Yi to convert to Christianity. Nang-Yi, while happy that her brother has returned, grows sad and confused by the conflict between her mother and brother. [MEDITATION WITH A PENCIL]


Ahn also explained why "Shaman Sorceress” will be the last animated work by his studio to be drawn in pencil.

“Only about 10 percent of this film was drawn digitally — the rest of the scenes were all drawn by hand,” Ahn said. “This was our last film to be drawn that way because the paper and pencils [we use] are no longer sold here in Korea, and no longer imported. No one buys pen and pencils anymore.”

The director also deeply sympathized with Mohwa and her insecurities about her profession.

“I think this is universal though,” Ahn said. “Everyone has some sort of anxiety regarding their work [...] Within the film industry, it may be about the transition to streaming services and those who achieve success like ‘Squid Game.’ Korean animators have similar fears like Mohwa in the sense that this industry seems to be dying because there is so much entertaining content. I also think about the things that I have to hold on to and the things I should let go. Thankfully, when I was facing similar confusions like Mohwa, I had people like Wook-Yi who supported me.

“A lot of young staff members were recruited to our studio for ‘The Shaman Sorceress,’ and this completely changed the process of our production. Before, it used to be a top-down progress. I showed [the crew] what I was working on after I finished structuring my scenarios and the sketches. But now, we get together quite often and I show them what I’ve been working on little by little. ‘The Shaman Sorceress’ is the first of my films that I really worked on together with our staff. All of our crew were the directors and pitched in their ideas.”

Although the rest of the studio members will transition to working on digital animation, Ahn believes that their experience with pencil and paper is crucial to differentiate local animation from overseas animation like Hollywood or Japan.

“I believe that there is a limit to configuring animations digitally,” Ahn said. “For instance, when you look at the webtoons that have become popular nowadays, I notice that a lot of the animated styles overlap [...] It can’t be helped because there is a limit regarding animated movements on digital screen. [However,] our crew has the experience in directing what parts of the animation should be drawn in by hand.”

“The Shaman Sorceress” wraps up Ahn’s five-part project of adapting short Korean novels into animated works. The project began with an omnibus of animated films called "The Road called Life” (2014), that were based on three short novels; “A Lucky Day” (1924), “When the Buckwheat Flowers Bloom” (1936) and “Spring, Spring” (1936). The fourth installment was a short animated film called “The Shower” (2014) based on the 1952 novel of the same name.

When asked what prompted him to start this project, Ahn replied simply, “because they [novels] are my first love.”

“I originally wanted to become a poet when I was young,” Ahn explained. “I wanted to be part of something related to literature. And there’s no specific reason behind my adaptation of short novels other than for my pure enjoyment — who doesn’t want to share stories about their first love? It’s also a great honor for my name to be mentioned next to great writers like Hwang Sun-won and Hyun Jin-geon.”

“The Shaman Sorceress” was released in local theaters Wednesday.