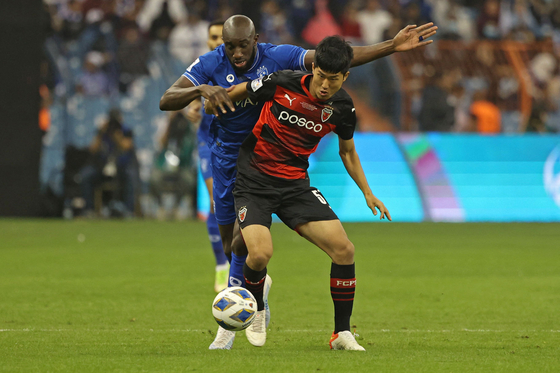 
The Pohang Steelers had to settle for second place at this year’s AFC Champions League, losing 2-0 to Saudi club Al Hilal in the final at King Fahd International Stadium in Riyadh, Saudi Arabia on Tuesday.

A follow up goal from Moussa Marega in the 63rd minute locked in the win, giving the Saudi club their fourth AFC Champions League title and making them, at least statistically, the greatest Asian football club.

Pohang didn’t go down without a fight, but with Al Dawsari setting the tone of the game so early, the Korean side were on the back foot before they were really able to get started.

Al Dawsari picked up the ball inside the Pohang half, stooping to head it away from Steelers forward Mario Kvesic, before driving forward toward the goal and sending the ball flying into the top right corner. Steelers goalkeeper Lee Jun was able to do little to stop the searing shot from the tournament MVP.

Pohang had a chance to respond in the 10th minute, when Sin Jin-ho — part of last year’s Champions League-winning Ulsan Hyundai squad — hit the crossbar and Lim Sang-hyub failed to convert the rebound.

Pohang continued to push, but the damage was already done and Marega’s second goal locked in the win for the home side. Sin’s 10th minute chance was the best the Steelers had, and in the end, Al Hilal comfortably controlled most of the game to walk away with the Champions League trophy.

“It would have been a more interesting game had that gone in and not hit the bar,” Pohang coach Kim Ki-dong said after the game. “We weren’t able to follow our game plan as we conceded so early, but Al-Hilal has good players and played a good game.

"What's disappointing about this loss is that we showed only 50 percent of what we'd prepared. I think some the younger players were a bit too nervous. I hope they will grow from this experience."

For the players, everything came down to that 16 second goal.

“When you concede a goal that early in the game, you are always going to be against it,” Australian defender Alex Grant, who’s well-placed header bought Pohang their spot on in the finals, said. “We knew coming into the game that it was going to be tough as they have great quality players. They were the better team.”

Pohang won’t have a chance to challenge for the Champions League title next year. The club currently sits in the bottom half of the K League table — split into two for the final few weeks of games — and have no way of climbing back up.

The Steelers have also been eliminated from the FA Cup, closing off the only other route to an AFC Champions League berth.