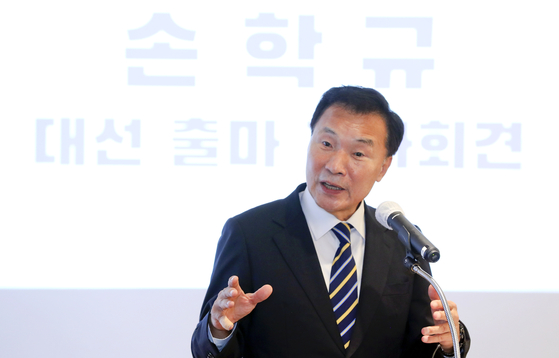 The 74-year-old former four-term lawmaker said he will run as an independent candidate in a press conference Monday at a café in Yeouido, western Seoul.

Sohn served as head of the Bareunmirae Party, which formed through a merger of centrist parties in 2018, until it was dissolved in February 2020 to become the current minor opposition Minsaeng Party. Sohn left the Minsaeng Party Monday.

He said that if he is elected, he will abolish the “imperialistic presidential system with unlimited power."

Sohn also plans to “make a country where the president does not go to prison” and “open a new path of parliamentary-centered coalition politics.” He said the current presidential system and two-party politics only promote conflict, division and confrontation and hinders a good future for the country.

Sohn, a student activist in the pro-democracy movement, joined politics in 1993 and became a lawmaker for the conservative Democratic Liberal Party, a predecessor of the current opposition People Power Party. In the Kim Young-sam administration in 1996, Sohn became Korea's youngest health minister.

Sohn ran in presidential primaries in 2007, 2012 and 2017 but was defeated. He was the liberal party’s runner-up in the first two, and in 2017 was defeated by Ahn Cheol-soo, running as a presidential candidate from the minor opposition People’s Party in the upcoming election.

Sohn is a graduate of the prestigious Kyunggi High School and Seoul National University and received a doctorate in politics from the University of Oxford.

In the press conference, Sohn called for a “visionary leadership” that will lead Korea into the future.

He called out the current political climate, "in which if one person becomes president, the other will go to jail.” He was referring to current tensions in the race led by Yoon Seok-youl, presidential candidate of the main opposition People Power Party (PPP), and Lee Jae-myung of the ruling Democratic Party. He criticized the idea of a “winner takes all” political system.

Sohn is described as a “Third Way” candidate, a new political force outside the ruling and main opposition parties. He has long pushed for constitutional amendment to end the current five-year, single-term presidency.

Sohn said he aims to abolish the political system established by the 1987 constitution.

He said Monday that he met with the PPP’s former interim head, Kim Chong-in, earlier in the day to ask for his help. However, Sohn said the meeting was to consult Kim as a senior politician, rather than to get him to join his campaign. Kim has refused to join Yoon’s election campaign committee.