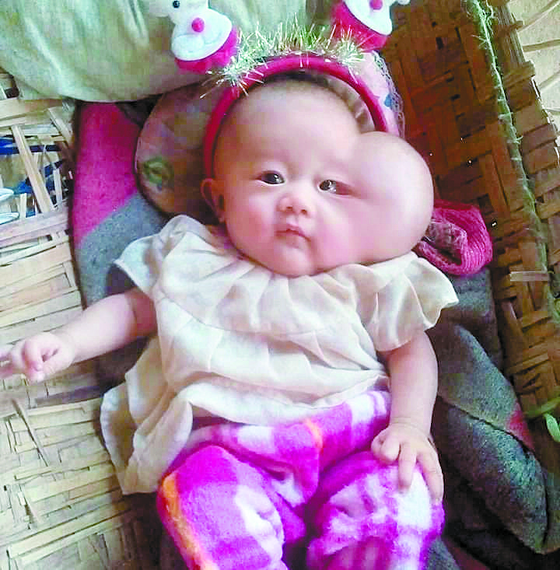 A photo of Christy is taken on her first birthday at her home in Bago, Myanmar. Christy was born with a benign lump on her face, which doctors in Korea removed early November at Bundang Cha Medical Center in Seongnam, Gyeonggi. [BIO PLASTIC SURGERY]


Last summer, Dr. Shin Yong-ho opened an email and was shocked at a photo of 18-month-old Christy, who had a massive bulge protruding from the upper left side of her face.

“It made her face look like a giant heart,” said Shin a 57-year old plastic surgeon based in Gangnam District, southern Seoul.

Apart from her misshapen head, Christy looked healthy and happy. In the photo, she was nibbling on a snack and smiling. But Shin knew that a lump of that sort could grow bigger, and very quickly -- endangering Christy's life.

Shin knew he could help medically. The problem was that Christy was in faroff Myanmar.

He turned to his church community, and they were able to raise 12 million won ($10,055) to fly Christy to Seoul from her small town in rural Myanmar.

Christy and her mother arrived in Korea early October.

“When I first saw the lump [in the photo], I suspected cystic hygroma – a rare yet benign birth defect that causes a large fluid-filled sac on a baby's skin,” said Shin.

“But after looking at her CTs [that were taken in Korea], it looked like the lump could be connected to her brain, which multiplied the risks of the surgery.”

As a plastic surgeon, Shin could not do such surgery alone. He needed a neurosurgeon partner.

He reached out to large hospitals but no doctors were willing to take on such a risky operation.

After three weeks of searching for a neurosurgeon partner, Shin was able to convince Dr. Jo Gyeong-gi, a neurosurgeon at Bundang Cha Medical Center and President of the Korean Brain Oncology Association, to help him.

The surgery was scheduled for Nov. 10, a whole month after Christie's arrival in Korea. It took eight hours and the participation of 16 doctors.

“We went into the operating room with a 10 percent possibility that the lump could be attached to her brain,” said Shin.

“When I excised the lump, the entire OR could see her brain pulsating – meaning that the mass went through Christy’s skull.”

At this point, Jo stepped in to remove parts of the brain that were not functional because they were damaged by the mass.

Then, Shin rebuilt her left cheekbone, which was destroyed by the weight of the lump.

The surgery was a complete success. The excised mass weighed two kilos.

“She will need a second operation when she grows up, but she should fully recover without any defects,” said Shin.

She has been discharged from the hospital and is recovering at a hotel in Dongdaemun District, eastern Seoul.

Christy's father, who was not able to come to Korea, sent Shin a handwritten letter thanking him for helping his family financially and giving his daughter a chance at a better life.