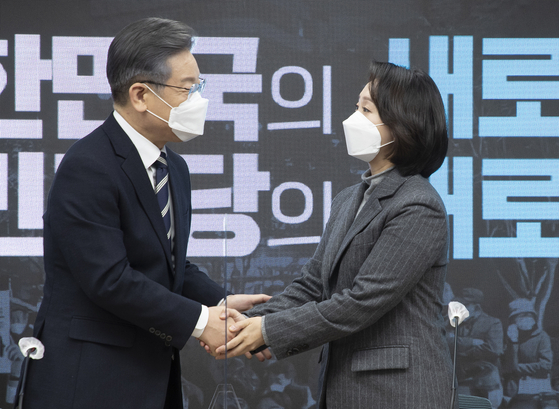 Democratic Party presidential candidate Lee Jae-myung shakes hands with Prof. Cho Dong-youn of Seokyeong University, who was named as a standing co-chair of Lee's campaign at the party's Yeouido headquarters in western Seoul on Tuesday. [NEWS1]


The ruling Democratic Party's (DP) presidential candidate Lee Jae-myung appears to be enjoying a bounce in popularity ahead of the March election as he adopts a more pragmatist approach in recent weeks.

After trailing former prosecutor general Yoon Seok-youl, his rival from the main opposition People Power Party (PPP) in the March presidential election, by almost a 10 percent gap for several weeks since both candidates’ party nominations were confirmed, Lee has narrowed the gap to 2.8 percentage points, according to a survey conducted by the JoongAng Ilbo on Friday and Saturday.

The smaller gap in Lee's approval ratings coincides with his revised policy stance, backing away from his pledge to implement universal basic income and a new land ownership tax if he is elected president.

In an interview with Channel A on Monday, Lee said that his promise to establish a new land ownership tax had been distorted by “misunderstandings” and that he would push ahead with it on the condition of obtaining public approval.

Lee also showed a more flexible attitude toward the implementation of new taxes, saying, “Tax hikes cannot be imposed if the people oppose them.”

Lee’s proposed land ownership tax, which would levy taxes by tallying the value of land held by individuals, was both a key component of the candidate’s real estate policy and his larger plan to finance his universal basic income pledge, which would distribute 1 million won ($837) per year to every individual.

At a press conference in July, Lee said his plan would impose an average tax rate of 1 percent on the value of privately-held land and collect 50 trillion won in new tax revenue per year to cover universal basic income.

Lee argued at the time that the land ownership tax “should be imposed to realize the concept of land as a public good, shut off sources of income that require no labor and curb real estate speculation.”

However, as Lee stepped back from the land ownership tax pledge, a major revision of the basic income pledge has become inevitable.

The DP, which has overhauled its leadership and began taking its policy cues from its presidential candidate, has also backed away from its universal basic income plan. The party will now likely only support basic income for certain segments of the population, such as young people and the elderly.

At a forum hosted by the JoongAng Ilbo on Nov. 24, Yoon Hoo-deok, head of the party’s policy division, hinted at a revision of the universal basic income pledge, saying, “I think we can fully implement the basic income for certain segments of the population, including young people, through an agreement between the ruling and opposition parties.”

Shifting away from public welfare policies, Lee has placed a renewed emphasis on economic growth in his policy agenda.

In a Monday speech marking the last 100 days before the March presidential election, Lee said his main goal is "to be a president for the economy and a champion of people's livelihoods," adding that he will focus all of his energy on "filling people's wallets and growing the country’s economy."

In contrast to his previously adversarial stance toward chaebol, Lee also said that he will support companies “that compete in the global market” and that his administration “will change unreasonable regulations to support innovation and creativity.”

Lee has also pivoted toward the center in his foreign policy stances.

At a meeting of foreign journalists on Thursday, Lee suggested that he would pursue “conditional lifting of sanctions” on North Korea and tit-for-tat compromises, not “grand deals” as were attempted at the 2019 U.S.-North Korea summit.

A DP lawmaker who spoke to the JoongAng Ilbo on the condition of anonymity said that the candidate’s centrist shift in foreign policy was motivated by his desire to appeal to the country’s middle class, which the lawmaker characterized as “conservative when it comes to diplomacy and security.”

“Lee is clearly tapping into such middle class preferences,” the lawmaker said.