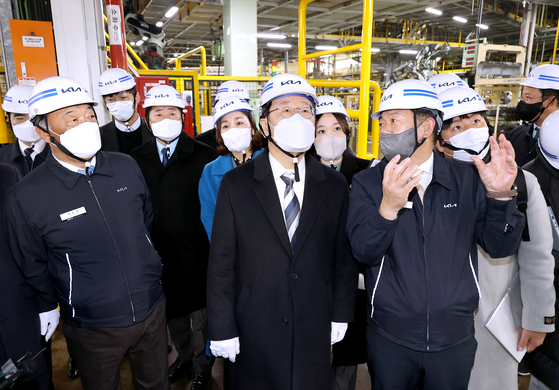 
The ruling Democratic Party's (DP) presidential candidate Lee Jae-myung pledged Tuesday to boost Korea's GDP per capita to $50,000 with the goal of joining the ranks of the world's top five industrialized economies.

In his comments at a New Year’s press conference at Kia Motors’ Soha-ri factory in Gwangmyeong, Gyeonggi, the DP candidate promised that if he is elected president, he will lead the way in overcoming the country’s economic woes.

The automobile plant where Lee delivered his Tuesday speech is widely considered the birthplace of the Korean car industry.

The factory is also where former President Kim Dae-jung in 2001 officially declared an end to the Asian financial crisis, which hit the Korean economy hard after it began in 1997.

Lee invoked the country’s history of surmounting past economic difficulties as he laid out his pledge to re-invigorate the economy. “Just as we overcame [past] poverty and handicaps, struggles and hardship, we will overcome the current crisis that Korea faces,” the candidate said.

The candidate also promised to put ideology to the side in his quest to lift the economy. “I will recruit talented individuals and implement good policies without regard for faction or ideology,” Lee pledged.

In his speech, Lee continued his ongoing pivot away from his previously stated policies, which included universal basic income and a new land ownership tax that he promised to enact if he is elected president.

“Instead of just fighting rising prices in the real estate market, I will prioritize protecting those who own only one house or no house at all and making sure the housing supply is ample enough to bring about market stability,” Lee said.

The candidate had previously pledged to levy a new tax by tallying the value of land held by individuals — a key component of the candidate’s real estate policy and his larger plan to finance his universal basic income pledge, which would distribute 1 million won ($840) per year to every individual.

At a press conference in July, Lee said his plan would impose an average tax rate of 1 percent on the value of privately-held land and collect 50 trillion won in new tax revenue per year to cover the universal basic income.

Lee argued at the time that the land ownership tax “should be imposed to realize the concept of land as a public good, shut off sources of income that require no labor and curb real estate speculation.”

However, as Lee stepped back from the land ownership tax pledge, a major revision of the basic income pledge has become inevitable.

The DP, which has overhauled its leadership and began taking its policy cues from its presidential candidate, has also backed away from its universal basic income plan. The party will now likely only support basic income for certain segments of the population, such as young people and the elderly.