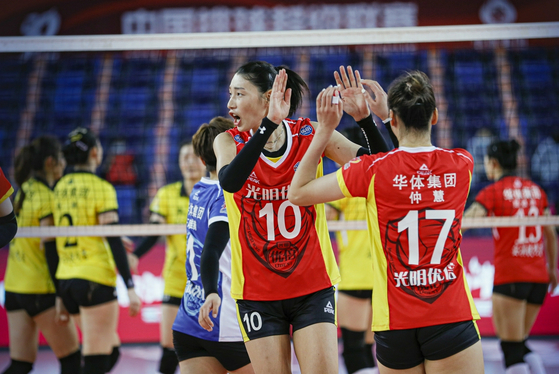 Kim Yeon-koung celebrates with her teammates on Tuesday during a match between Chinese club Shanghai Bright Ubest and Fujian Anxi Tiekuanyin at Jiangmen Sports Center in Guangdong, China. [SCREEN CAPTURE]


Kim Yeon-koung scored the most points in a match between Chinese clubs Shanghai Bright Ubest and Fujian Anxi Tiekuanyin on Tuesday, leading Shanghai to their third win in a row.

Kim led the Shanghai club to a decisive 3-1 win against Fujian at Jiangmen Sports Center in Guangdong, China on Tuesday, adding 25 points, the most of the match. Kim scored nine points in the first set alone, with Shanghai winning the set 25-15.

The Chinese Super League started on Thursday and Korean volleyball star Kim first appeared for Shanghai first on Saturday, the first time in 111 days that Kim has been on the court. The last time Kim played was in the bronze medal match against Serbia at the 2020 Tokyo Olympics.

Ahead of the opening of the season, the Chinese Volleyball Association announced a new rule limiting the maximum number of foreign players playing at a time to one per team. As the top two players for Shanghai are Kim and Jordan Larson of the United States, who was named MVP at the Tokyo Olympics, the rule worked against the club.

Kim is the face of Korean volleyball, having dedicated the best part of 20 years to the national team, rising through the ranks from an exceptionally talented high school student to a seasoned veteran and the talismanic captain of the squad.

After retiring from the Korean team, Kim joined Shanghai this season, returning to the team four years after she led it to the top of the Chinese Super League in 2018.