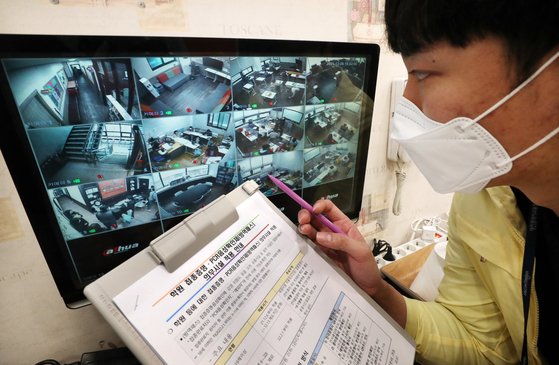 A Ministry of Education official checks a hagwon (cram school) in Daejeon for any violations of Covid-19 regulations on Monday. [NEWS1]


Students and parents are protesting the government's new vaccine pass system, saying it infringes upon adolescents' right not to get vaccinated.

From Feb. 1, 12 to 18-year-olds -- people born between the years 2003 and 2009 -- will require vaccine passes to enter those places, unless they submit a negative PCR test that was conducted within the previous 48 hours, according to the Central Disaster Management Headquarters’ briefing Friday.

In protest, an 18-year-old student in Daegu filed an online petition on the Blue House website Nov. 26, writing that the regulation is discriminatory against students and their right to an education.

The petition received 230,000 endorsements as of Monday morning.

“One of the main reasons that I am against the government’s new vaccine pass system [focused on teenage minors] is because it violates our basic right to choose,” wrote the student in the petition.

“[Though it may be rare], the vaccine does carry real critical side effects that can even lead to death […] We should not be pressured [to get jabs] through vaccine passes and maintain the right to choose not to get vaccinated.”

Because the petition received over 200,000 endorsements under 30 days, a government official will need to publicly address the issue next month, according to the regulations of the Blue House Petition Board.

In a Central Disaster Management Headquarters’ biweekly briefing Monday, health authorities explained that they expanded the vaccine pass system to minors to bring down the soaring daily infections, which have doubled in the past month.

“The government has decided to more strongly advise vaccinations for minors because the situation has grown that much more dangerous over the past month,” said Son Young-rae, senior epidemiological strategist at the Central Disaster Management Headquarters.

“As the necessity grew for more people to be vaccinated, we have decided to expand the vaccine pass system to include individuals from ages 12 to 18.”

Son added that the infection rate for Covid among minors surpassed that for adults over the last four weeks.

Yet, teens and their parents say that requiring a vaccine pass in places like hagwon, which are considered essential facilities for nearly all middle and high school students in Korea, is unfair.

“Enforcing a vaccine pass system in hagwon is a violation of the children’s right to learn,” said Ms. Lee, 47, a mother of two in Seongbuk District, central Seoul.

“More cluster infections occur in department stores, amusement parks and religious facilities, which do not require vaccine passes, so this policy is very hard for us to comprehend.”

Also, some parents are worried about subjecting their children to vaccines that have not yet been proven to be completely safe.

According to the Korea Disease Control and Prevention Agency (KDCA), only 27.9 percent of adolescents between the ages of 12 and 17 had been vaccinated while over 90 percent of people 18 and older had been as of Saturday.

Some expressed worries about the limited time frame left for inoculations in order to be considered fully vaccinated by February, when the vaccine pass system applies to minors.

“In order for my kid to be fully vaccinated and eligible for a vaccine pass, he needs to receive his first jab by next week at the latest,” said Mr. Kim, 38, a father of a middle schooler in Seongdong District, eastern Seoul.

“This means he has to get vaccinated during his school’s final exam period, which is absurd.”

The hagwon industry is also protesting.

“Hagwon are not multi-use facilities that anyone can enter without being recorded, so it does not make sense to require a vaccine pass here,” said Lee Yu-won, president of the Korea Association of Hakwon.

“We are in the works of organizing protests with other parent organizations and associations.”

Experts say that while it may be true that more minors need to get vaccinated to ameliorate the spread of the virus, minors and their parents should be persuaded with legitimate scientific data rather than coerced.

“If the government wants more minors to get vaccinated, it needs to convince them and their parents with scientific data, not indirectly force them with vaccine passes,” said Kim Woo-joo, doctor of infectious diseases at Korea University Guro Hospital.