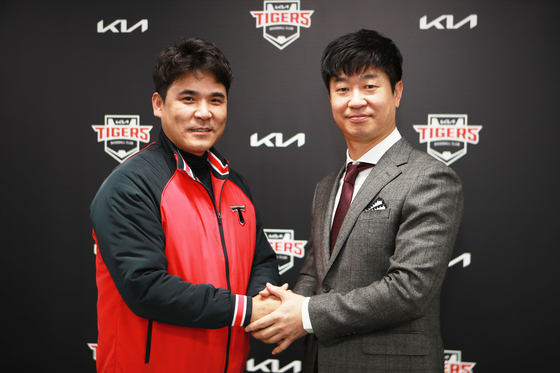 Kim was drafted by the Tigers, then called the Haitai Tigers, in the first round in 1996. He debuted that year and was a regular fixture for the next 13 seasons, still managing 108 at-bats in 2009 before he retired at the end of that year.

After retiring, Kim immediately transitioned to coaching within the Tigers operation. He has been coaching the first team since 2012, including years as the first base coach.

Speaking after his appointment, Kim highlighted the need for the Tigers to work on their fundamentals — and especially their speed — to gain an edge against big hitting clubs.

"Objectively speaking, we're not much of a power-hitting club, but we can be competitive with our speed," Kim was quoted as saying on Yonhap. "I think the players were afraid of getting thrown out. Aggressive base running can put pressure on the other team. I'll tell the players to keep running. They have to overcome fears. The more passive you are, the more afraid you'll become."

The Tigers finished the 2021 season in ninth place with 58 wins and 76 losses. As well as finishing one spot off the bottom overall, they were also second-to-last for both steals, at 73, and attempted steals, at 104.