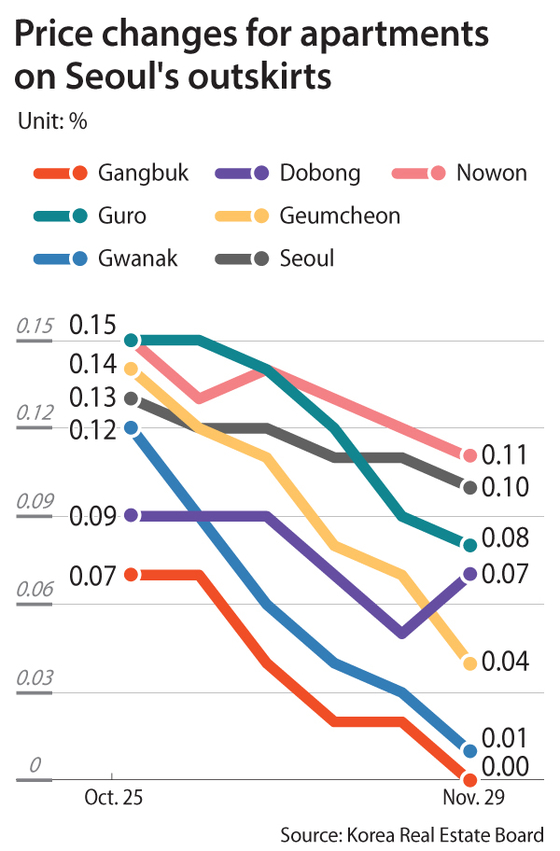 Demand for apartments on the outskirts of Seoul has withered as a result of stricter loan standards and higher interest rates.

Prices for apartments on the outskirts of Seoul started to spike late last year as people in their 20s and 30s rushed to buy residents -- fearful that it was their last chance before they were priced out of the market.

But from Nov. 29 to Dec. 5, the weekly increase for apartment prices in Gangbuk District in northern Seoul was zero percent -- ending a 77-week rise, according to the Korea Real Estate Board on Tuesday.

The weekly growth rate for apartment prices in Dobong District was 0.07 percent, and in Nowon District it was 0.08 percent. The rate was also low in southern Seoul: in Gwanak District at 0.01 percent, Geumcheon District at 0.04 percent. Guro District, western Seoul, saw a 0.11 percent weekly rise.

Demand for apartments on the outskirts of Seoul was high among people in their 20s and 30s due to their relatively affordable price.
The average price per 3.3 square meter (35.52 square feet) in Dobong District jumped 29.6 percent in a year from 25.09 million won ($21,300) in November 2020 to 32.5 million won last month, the highest increase in Seoul in the period.

The debt service ratio (DSR), which is loan payments divided by a borrower’s income, will be reduced from 60 percent to 50 percent next year for non-banking financial institutions. This means principal and interest payments on loans will be limited to half of borrowers' incomes from next year.

As purchases fell off, the number of apartments available for sale has grown.

Of the 25 districts in Seoul, Gangseo District in western Seoul, saw the largest jump in residences offered for sale. The number of homes put up for sale in Gangseo District jumped 28.9 percent to 2,038 in November compared to three months earlier, according to real estate information provider Asil. The increase in Nowon District was 24.8 percent, in Gangbuk District 24.2 percent, in Guro District 20.4 percent and in Jungnang District, eastern Seoul, 19.1 percent.

Home purchase by people in their 20s and 30s fell off markedly.

Residential purchases by people in their 30s or below accounted for only 40 percent of all transaction in October – the second lowest rate this year since 40.1 percent in February.

“People in their 20s and 30s are put in a difficult situation trying to purchase a home due to the loan regulations,” said Suh Jin-hyung, a professor who teaches business at Kyung-in Women’s University.