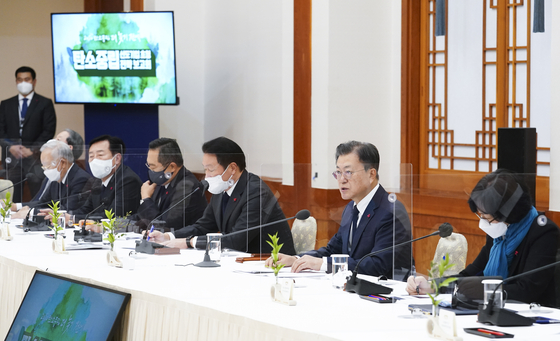 A minimum of 94 trillion won ($79.6 billion) will be invested by 2025 in renewable energy as part of the government's pledge to achieve carbon neutrality by 2050.

While 33 trillion won will be invested by the private sector, the government will cover the rest.

The government on Friday released its first comprehensive road map for achieving net-zero carbon by 2050 since President Moon Jae-in pledged carbon neutrality a year ago.

Under the plan, the government has set five goals: increase the ratio of renewable energy from 3.6 percent in 2018 to 70.8 percent by 2050; increase the supply of clean hydrogen gas from zero to 60 percent during the same period; increase the ratio of high-value environment-friendly products, such as future mobility vehicles, next generation rechargeable batteries and biodegradable plastics, from 16.5 percent to 84.1 percent; lower carbon emissions from manufacturing by 86 percent; and becoming one of the world's top four exporters from sixth in 2018.

It will shut 24 coal-powered plants by 2034. And by 2050, all coal-powered generators in the country will all be out of service.

Under the plan, nuclear energy, which is the second-largest contributor after coal at 29 percent, will be reduced to 6.1 percent by 2050.

In boosting renewable energy, the budget for carbon neutrality R&D for next year has been doubled to 408.2 billion won.

The government plans to increase funding for carbon neutrality, which currently accounts for 16.7 percent of the government's industrial R&D budget, to a minimum of 30 percent by 2030. It also emphasized financial and tax support for private companies working on reducing carbon emissions.

Tax credits for R&D spending on new growth engines and technologies is between 20 percent to 40 percent, which is more than the 2 percent to 25 percent provided for other R&D.

"As a member of the world's advanced countries and for the future generations, carbon neutrality is a path we must take," President Moon Jae-in said Friday during the ceremony, which was held at the Blue House, celebrating the first anniversary of pledging carbon neutrality by 2050. "Especially amid the major transition of global industry where carbon neutrality is accelerating, we have to move towards a low-carbon market rather than having ourselves locked under the glass ceiling of high-carbon emissions."