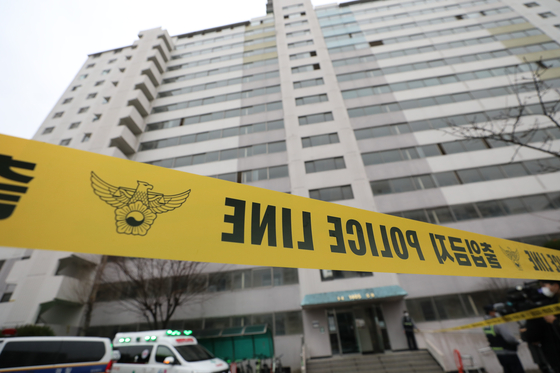 Police tape surrounds an apartment complex in Goyang, Gyeonggi, where Yoo Han-gi, a key suspect in a land scandal allegedly involving Lee Jae-myung, the presidential candidate of the ruling Democratic Party, was found dead in an apparent suicide on Friday. [NEWS1]


The head of a city development company facing possible arrest in the Daejang-dong corruption scandal was found dead on Friday in an apparent suicide.

Yoo Han-gi, head of Pocheon Urban Corp. and former division manager of the Seongnam Development Corporation at the time the controversial project was launched in 2015, was found dead near his home in Goyang, Gyeonggi on Friday, according to police.

He was reported missing by his family at around 4 a.m. Friday after he left home leaving behind a suicide note. Police found that Yoo left home on foot at 2 a.m., and dispatched personnel to search the surroundings.

At 7:40 a.m., a local resident reported to police after finding Yoo lying on the flowerbed of an apartment complex near his home.

Hwacheon Daeyu is a small asset management company that is being investigated by prosecutors for its outsized profits in the Daejang-dong development in Seongnam, Gyeonggi.

Its outsized profits from the development have sparked a months-long probe by prosecutors into those suspected of rigging the project’s shareholder composition and profit distribution scheme in favor of the previously little-known company, its affiliates and their owners.

Yoo, who denied the allegations, was scheduled to attend an arrest warrant, or an examination of a suspect before arrest, on Dec. 14.

"This is what happens when the No. 1 architect [of a scandal] is left alone and only those around him are investigated," the opposition People Power Party Chairman Lee Jun-seok wrote on Facebook following the death of Yoo, obviously referring to ruling Democratic Party (DP) presidential candidate Lee Jae-myung, who was mayor of Seongnam when the controversial development project was pushed through.

Lee has denied any connection to the scandal, and expressed his openness to an independent counsel investigation of it.

“I feel great sadness in the choice [Yoo] has made,” Lee said in a statement, adding, “To find out a substantial truth, a special probe should be pursued immediately.”